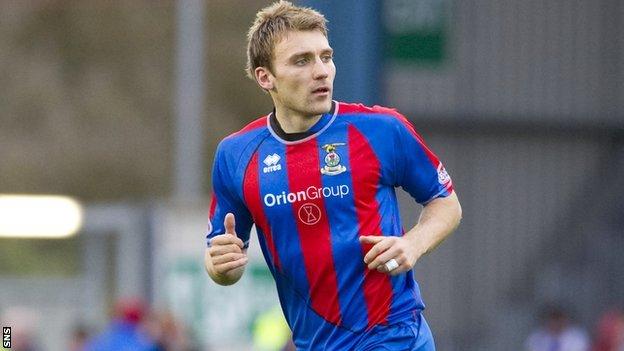 Inverness defender Chris Hogg hopes to be back in full training by mid-August as he continues his recovery from cruciate ligament damage.

Hogg sustained the injury in December and underwent surgery a month later.

"I've badly missed my football and I'm delighted now to be getting really close to full training", he told the Inverness website.

It's great to be kicking a ball again

"I'm miles ahead of where I should be in my rehabilitation. I'm going to be back in action as soon as I can."

The 27-year-old former Hibs captain originally joined Inverness during season 2010/11 and became an important part of Terry Butcher's side before his injury setback.

"It's been very frustrating but I'm now looking for the OK from my surgeon in the next couple of weeks and that will be a huge weight off my mind," he added.

"I owe the manager, the club and the supporters for backing me through this difficult time. My aim for this season is to play better than I have done so far in my Caley Thistle career.

"I feel I've not shown my best since coming north and this is my opportunity to put that right, win a place in the side and help the team to do well.

"It's great to be kicking a ball again."