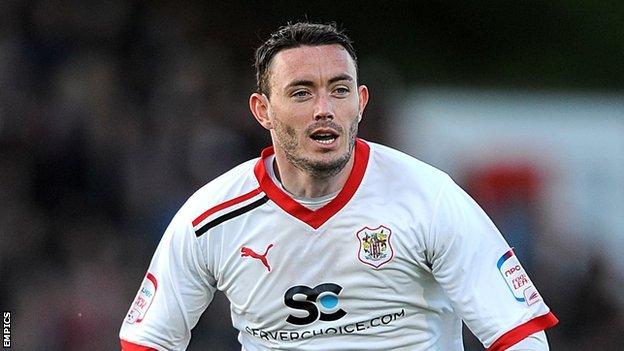 Craig Reid says the prospect of playing under Dean Holdsworth again was a major factor in his move to Aldershot Town.

The 26-year-old striker spent two and a half years at Newport while Holdsworth was in charge of the non-league club.

He told BBC Surrey: "I had a couple of offers from League One and I could have stayed at Stevenage if I wanted to.

"As soon as I heard of the interest from the gaffer and Aldershot I wanted to talk to them straight away. I'm more than happy to link up with him again."

The striker added: "It [the move] was down to the respect I had for the gaffer and what he's trying to build here.

"He gave me a chance at Newport and now he's given me another chance now."

"The gaffer and myself had him at Newport and he was fantastic there," Bishop told BBC Surrey.

"Going into League football has rounded him. He's not only a goalscorer but he's fantastic with his back to goal and his link-up play."

Reid believes the experience he has gained during his 18-month spell at Stevenage will help the Shots as they target a play-off place in League Two next season.

"The gaffer knows I've got the mentality required and I've got a bit of experience of this league and what it takes to get out of it," Reid continued.

"If I can bring that to this squad that can only be a bonus.

"We want to do as well as we can. The more we play together it becomes clear we'll be in the mix towards the end of the season."