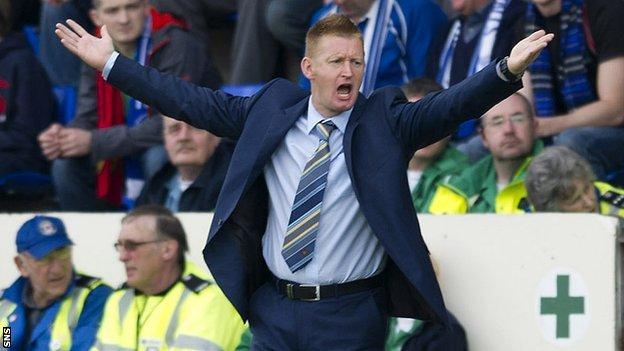 Manager Steve Lomas was proud of St Johnstone's performance in the draw with Eskisehirspor, despite the result meaning the Perth side's European exit.

The 1-1 stalemate at McDiarmid Park completed a 3-1 aggregate win for the Turkish side in the Europa League second qualifying round.

"I thought they were magnificent," Lomas told BBC Scotland.

"It was always going to be key if they got the away goal, the tie was effectively over."

We've got nothing to be ashamed of

Gregory Tade headed St Johnstone ahead 10 minutes before half-time and Nigel Hasselbaink had an effort saved by Eskisehirspor goalkeeper Ruud Boffin before Veysel Sari levelled in the second half.

"When you get your chances, you've got to take them," said Lomas. "Nigel Hasselbaink's [chance] to make it 2-0 is the key moment. They were looking edgy.

"They kept going, they had a couple more chances when we could've won the game.

"I thought they showed against a very good Turkish team that we're an honest, hard-working and good set of footballers."

Tade was also buoyed by the performance and expects his partnership with Hasselbaink to "dazzle people this year".

"We'll do what people don't expect of us and we've got goals in us," said the Frenchman.

"It's going to be a great season, I can feel it. I'm excited for this season.

"We said before the game [against Eskisehirspor] if we managed to score first we were still in the tie and would have a great chance but unfortunately it wasn't meant to be.

"They were skaky, they were there for the taking. We had two great chances.

"We were unlucky, at least we created good chances against a big club with a bigger budget than us so we've got nothing to be ashamed of."