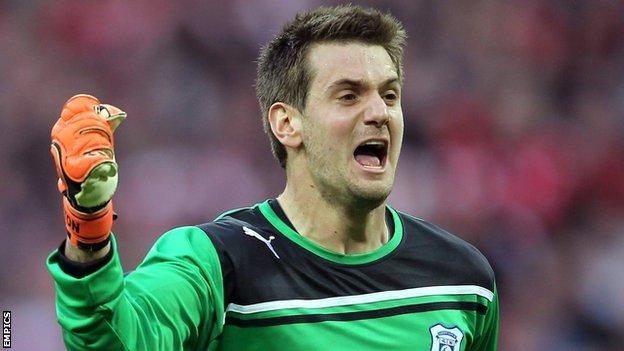 Bristol City have signed goalkeeper Tom Heaton on a one-year deal with the option of a further season.

The former Manchester United trainee, 26, spent the last two seasons at Cardiff City but was released in May.

He joined Bristol City for their pre-season tour of Spain after turning down an offer to join Watford.

"I met the manager and the goalkeeping coach at the end of last season and I took a shine to them," Heaton told BBC Radio Bristol.

"It looked as if I was going to Watford for a time but from the moment I came through the door here it felt great."

He was loaned out to Swindon, Royal Antwerp, Cardiff, Queens Park Rangers, Rochdale and Wycombe, before being released by his parent club without making a first-team appearance.

Heaton was snapped up by then Bluebirds manager Dave Jones and claimed the number one shirt following an injury to David Marshall.

"The desire to play is what drives me," continued Heaton. "I could have stayed at Cardiff but it's not what I wanted to do.

"I wanted to establish myself and hopefully I can do that here."

Bristol City manager Derek McInnes had been in the market for a goalkeeper since the departure of David James at the end of last season, and Heaton will now compete for a first-team spot against Dean Gerken.