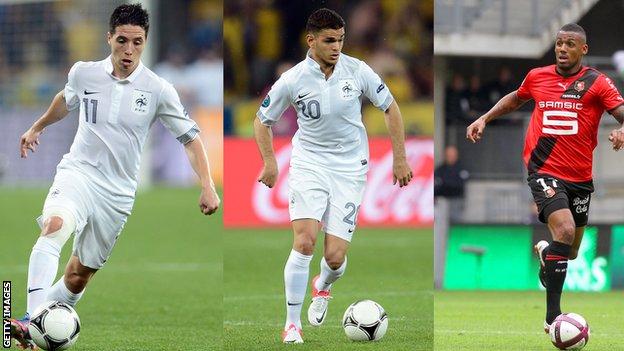 Manchester City's France midfielder Samir Nasri has been given a three-match international ban for his behaviour during Euro 2012.

A French Football Federation committee decided to punish him following several incidents in Poland and Ukraine.

Paris St-Germain's Jeremy Menez was given a one-match ban for an argument with team-mate Hugo Lloris during the 2-0 quarter-final defeat by Spain.

Nasri, 25, swore at a reporter following the loss to the tournament winners, and also made a gesture with his finger over his mouth and yelled "Shut your mouth!" at another journalist after scoring in the opening Group D match against England.

The suspensions rule both players out of a friendly against Uruguay next month, while Nasri will also miss the 2014 World Cup qualifiers against Finland and Belarus.

M'Vila ignored former head coach Laurent Blanc when he was replaced by new Arsenal signing Olivier Giroud in the game with Spain on 23 June, while Ben Arfa was involved in a dressing-room argument with Blanc following the 2-0 group stage defeat by Sweden.

Disciplinary committee head Jean Mazella told RMC radio that the players "did not apologise" but that they "regretted what they said and how they behaved".

The offences in eastern Europe followed the FFF's decision to suspend all 23 squad members for one game after the players boycotted a training session during the 2010 World Cup when Nicolas Anelka was sent home for insulting Blanc's predecessor Raymond Domenech.

Blanc's contract with the governing body has since come to an end, and he has been replaced by former Chelsea midfielder Didier Deschamps.