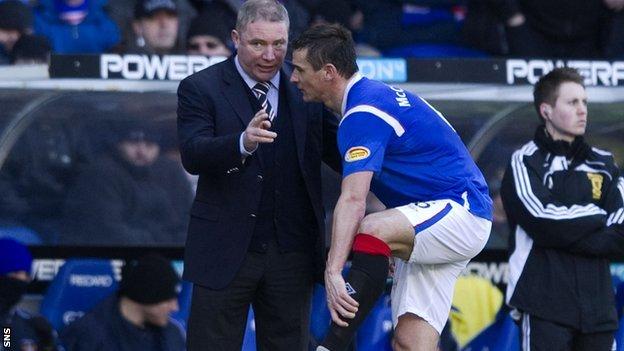 Falkirk manager Steven Pressley suggests that playing in the Ramsdens Cup will not be the culture shock for the new Rangers that many expect.

The former Rangers defender last season led the Bairns to their fourth victory in a Challenge Cup final.

But this year Ibrox players used to life in the Scottish Premier League will join them in the first round when they face Brechin City on Sunday.

"Many of their players have faced teams like Brechin before," said Pressley.

"They played against Arbroath in the Scottish Cup last season."

International players like Steven Davis, Allan McGregor, Steven Naismith, Kyle Lafferty and Steven Whittaker refused to have their contracts transferred from the old Rangers to the relaunched Ibrox club, who have been placed in Division Three.

And the uncertainty of who will exactly take the field for the visitors at Glebe Park leaves former Scotland international Pressley unsure whether Rangers' involvement will make it a more difficult trophy to retain.

"I don't know the type of Rangers that will be playing in the coming season," he told BBC Scotland.

"It all depends on whether he [McCoist] gives youngsters their chance or goes for more experience.

"He will have a budget and will be wanting to bring in the best players within that.

"Hopefully, for Ally and his staff, it proves to be a good transition."

Pressley thinks having Rangers involved will be a boost for the Ramsdens Cup and that the new club and their fans should not underestimate the importance of the competition for clubs outside the SPL.

"I think a club of that size being involved in the competition will generate a great deal of interest in it and will be a major plus," said the manager, whose side start their defence at home to Stirling Albion on Saturday.

"For us, the Ramsdens Cup is very important.

"We are the current holders, early cup competitions can bring an early momentum and feel-good factor for players and fans and it is also an extra source of finance."

Pressley has lost top scorer Farid El Alagui to Brentford during the close season, but is not putting pressure on former Bournemouth striker Lyle Taylor to match the Moroccan's strike rate.

"We've signed another number nine, but I am not going to burden him with getting 28 goals this season," added the First Division club's manager.

"We were too reliant on one player last season and hopefully we can get more from other areas.

"The average age of the squad is 19 and I'm not going to burden them with expectations of promotion, but I hope we can get ourselves in the mix."