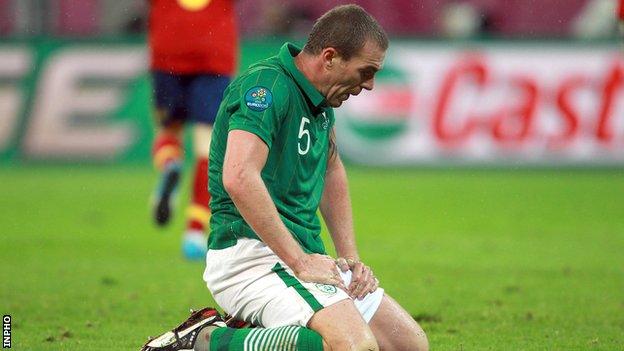 The Aston Villa man revealed that he has asked his club manager Paul Lambert for advice over the issue.

"It has crossed my mind a few times. I just have to think about things," said the 32-year-old.

"It's a hard decision, because it [playing for Ireland] is something I love doing, and I had a chat with Paul Lambert about it."

The Dubliner was part of the Republic's Euro 2012 campaign in which they failed to qualify for the knockout stages after losing all three group games against Croatia, Spain and Italy.

"It's easy after a tournament, the way it has gone, to make a rash decision and say 'that's it'," added Dunne, who has won 76 caps for the Republic.

"He [Lambert] said it has to be down to me because if I'm not happy with the decision and I regret it, then it's no good. I've already spent four weeks thinking about it and still can't decide."

Dunne was among a number of senior players left out by Republic manager Giovanni Trapattoni for next month's friendly against Serbia although the Italian insists they all remain part of his plans.

Skipper Robbie Keane, Shay Given and Stephen Hunt were also left out of the 23-man panel with Marc Wilson, Seamus Coleman and James McCarthy among those called up by Trapattoni.

Kevin Foley, dropped from the Euro 2012 squad after being named in the original panel, declined the offer of a place in the squad.