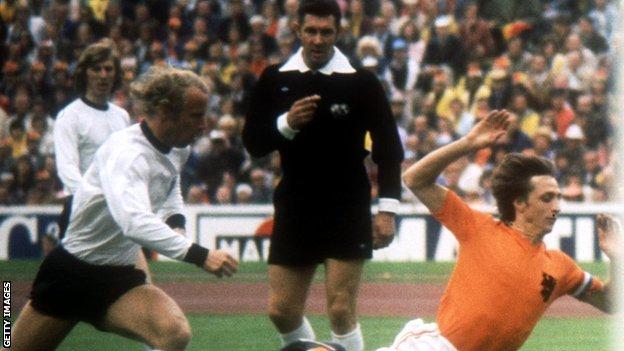 Former referee Jack Taylor OBE has passed away at the age of 82 at his home in Shropshire.

The Englishman awarded the first penalty in a World Cup final when he took charge of Germany's 2-1 win over the Netherlands in 1974.

Taylor officiated in more than 1,000 matches, including more than 100 internationals and was also inducted into Fifa's Hall of Fame.

He went on to work for the Football League after retiring from refereeing.

"Jack Taylor set the benchmark for refereeing, not just in this country but across the world, and in later life he applied the same levels of integrity, commitment and sheer love of the game to his other roles in football," said Football League chairman Greg Clarke.

"Very few people in football can match the contribution made by Jack Taylor and fewer still have managed to do it while retaining the respect and admiration of absolutely everyone they have come into contact with.

"He will be greatly missed by everybody at the Football League and its clubs and our thoughts are with his family and friends."

Premier League chief executive Richard Scudamore added: "I am extremely sad to hear of Jack Taylor's passing and send my sympathies to his wife, other family members and friends.

"Jack was one of English football's finest ambassadors who reached the pinnacle of refereeing and, until his very last days, continued to help the development of young referees.

"From our first meeting he remained a constant source of encouragement and I will miss him. The game has lost a great servant and a true friend."