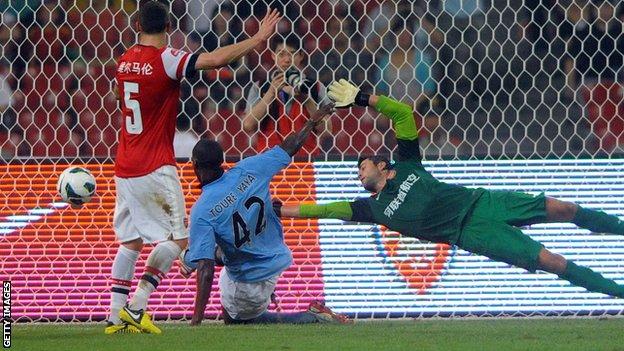 Manchester City beat Arsenal 2-0 in Beijing thanks to first-half strikes from Pablo Zabaleta and Yaya Toure.

The Gunners were without Robin van Persie who has not travelled with them on their pre-season tour and has been the subject of a bid from City.

In the next City attack, Toure finished Sergio Aguero's flick-on from Aleksandar Kolarov's cross to put the Blues in total control.

Manchester City boss Roberto Mancini may be frustrated at progress on signings but even without City's Euro 2012 contingent, the Premier League champions came out on top in a game that ended in monsoon conditions at the Bird's Nest stadium in the Chinese capital.

Arsenal had most of their senior players available, but were restricted to a couple of Theo Walcott efforts in the first half.

Gunners boss Arsene Wenger will be buoyed by the impact of Alex Oxlade-Chamberlain, who struck both posts in the second half after coming on as a substitute at the interval.

But Wenger refused to be drawn afterwards on the future of Van Persie, who is out of contract next summer and has announced he will not sign a new deal with the club.

"We have our main strikers at home and Van Persie is one of them," he told Arsenal's website.

"But we have [Lukas] Podolski and [Olivier] Giroud who are at home, so we have plenty of strikers. For us at the moment it is to prepare for the season - it is more than any individual player."

Mancini experimented with a 3-5-2 formation, with Zabaleta and Kolarov impressive in wing-back roles.

And the Italian revealed that he could use the formation next season when City defend their Premier League title.

"It is good to have other options and things went well so it is maybe something we use again at certain times," Mancini told the club's website.

"We played a good game. It was an important win and a great performance against a very good side so I am happy with the way things went."