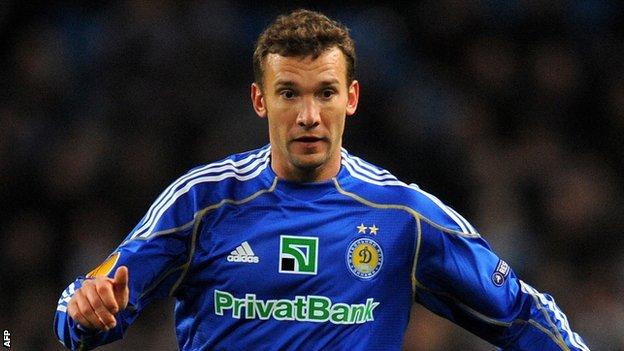 Former Chelsea striker Andriy Shevchenko has announced his retirement from football in order to pursue a career in politics.

The 35-year-old Ukrainian revealed the news in a statement released by his club, Dynamo Kiev.

"This could shock everyone," he said. "My future is no longer in football."

He won his 111th and final cap for Ukraine on home soil at Euro 2012 when he came on as a substitute during his side's 1-0 group stage loss to England.

At club level, he made his debut for Dynamo Kiev in 1994 and went on to earn a reputation as one of Europe's most lethal strikers after he moved to AC Milan in 1999.

He won the Champions League with them in 2003 - scoring the winning penalty in the shoot-out - in a playing career that also saw him collect domestic silverware in Italy, England and Ukraine.

As a 29-year-old, Shevchenko signed for Jose Mourinho's Chelsea for £30m in May 2006, but spent a largely unproductive two-season spell in the Premier League before returning to Milan.

After he was unable to reproduce the deadly form of his previous spell at the San Siro, he signed a two-year deal with Dynamo in August 2009.

Shevchenko was his country's talisman for more than a decade, and registered a national record 48 goals. He captained his country to the World Cup quarter-finals in 2006 and won the Ballon d'Or in 2004 as European player of the year.

"I will be going into politics," he said when announcing his retirement, and is expected to elaborate on his plans in the near future.