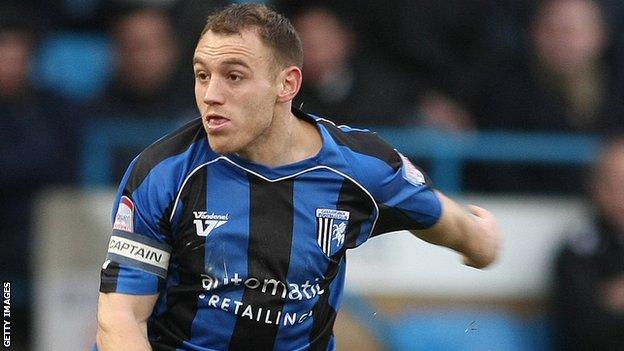 The 27-year-old has been at the League Two club since 2008 but played only 10 games last season because of injury.

"He is a diamond bloke to have around but I have to make these decisions," Allen told the club website.

"I feel it is only right to give him an opportunity to find a club that can give him a contract now for security for his family."

Sad to be leaving the Gills after four years. Some great memories and meet some great people. Thanks to the people who supported me in that time.

Fuller will continue to train with the Gills and Allen said there could be an opportunity for the former Stevenage and Charlton man to re-sign.

"At the present moment we are not in a position to offer him a contract as he still needs to do more work to get up to top level," continued Allen.

"In a few weeks if he hasn't got something and we haven't got what we want then the door will still be left open for Barry to return.

"He can continue to train with us to help him keep fit as I realise and respect he has been a good servant to this club."

Meanwhile, Allen has revealed he will not be offering deals to triallists Ryan Gilligan and Dean Morgan.

Morgan was released by Chesterfield at the end of the season, but Allen has decided against signing him permanently.