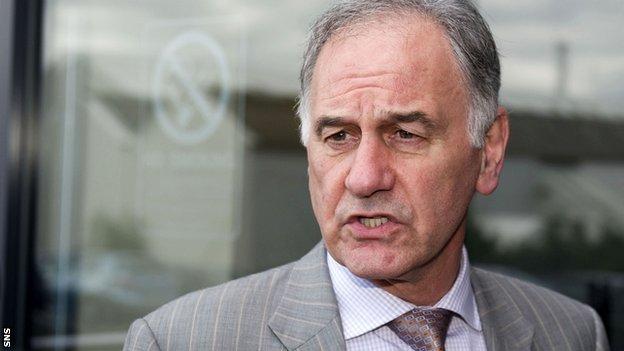 Green agreed a deal that will allow Rangers' matches in the Third Division to be shown as part of the Scottish Premier League's broadcast offering.

The negotiation was part of the club's acquiring of Scottish FA membership.

"We signed up to the TV deal because we don't want to be held responsible for the downfall of Scottish football," Green told the Rangers website.

This is not the end of the problems for Scottish football

"But someone is responsible for the demise.

"It's the end of the problems for Rangers but it will be the beginning for many other clubs. I think it will hugely difficult for Scottish clubs.

"There is no doubt Scottish football has been going downhill and if you look back in history, as I can as a non-conflicted outsider, to 14 years ago when the SPL was formed and since that time Scotland hasn't qualified for a major competition.

"Incomes have not grown and there really has to be a look at where Scotland as football business is going."

Rangers, who have been relaunched by Green's Sevco Scotland consortium after the company that formerly ran the club headed for liquidation, also agreed to incur penalties in order to acquire the old Rangers' licence to play competitive matches.

These include a 12-month transfer ban handed to Rangers earlier this year over disrepute charges. The embargo will take effect on 1 September.

"If we had come to the table with a clean piece of paper then we wouldn't have signed up to the agreement but the realities are there have been historical misdemeanours and this is the price we have paid," Green said.

"We were on the outside trying to get membership of the SFA and they set the rules and the regulations.

"I'm interested to see how things will be applied in the future because this is not the end of the problems for Scottish football.

"We'll make a lot of friends along the way I'm sure and while our former friends have the difficulties they are going to face Rangers and the fans will have an enjoyable few years walking through the divisions."

Green also indicated there would be no job losses as a result of Rangers starting the new season in the bottom tier, after having their bid to replace the old Ibrox club in the SPL rejected.