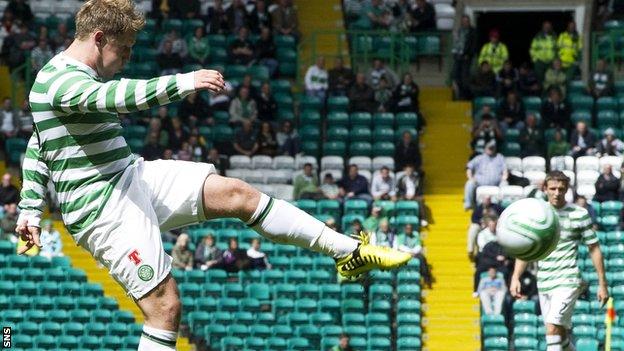 Commons hobbled off near the end of Saturday's 1-1 draw with Inter Milan, having opened the scoring with a fine strike just before the interval.

Stokes was carried off on a stretcher in the first half after blocking a clearance from Esteban Cambiasso.

"The next 24 hours will be important, to see how they react," explained Lennon. "I think Kris would be a bigger doubt that Anthony at the minute.

"We will give them as long as possible to see if they can recover in time for Wednesday."

Scott Brown, James Forrest, Thomas Rogne and Kelvin Wilson were all rested for the friendly at Celtic Park and Lennon is confident the quartet will be available to face HJK Helsinki.

"I would like to win Wednesday's game and win it by as much as possible but having watched Helsinki I know it's going to be a really hard game," said Lennon

"They have got a bit of pace in their team, particularly in wide areas.

"They have very fit players who know their way around the pitch and they are going to be hard to beat, to break down, so the onus is on us to try to do that. And we will have to be patient.

"I think physically we are in good condition and the football is starting to look better so I think we are ready."

Celtic go into their European campaign with only one win in six pre-season games.

But Lennon was heartened by the display against Inter, adding: "I thought their was a real spring in their step. They played really well against a class side.

"To say that was the best we've played pre-season would be an understatement."

Celtic's goal came when Charlie Mulgrew picked out Commons with a free-kick and the Scotland international took a touch before sending a looping volley over goalkeeper Samir Handanovic from 18 yards.

The former Derby and Nottingham Forest midfielder later injured himself stumbling over the ball, leaving Celtic with 10 men for the closing stages.

Inter took advantage when Rodrigo Palacio turned the ball in from a few yards out from a Marko Livaja cut-back.