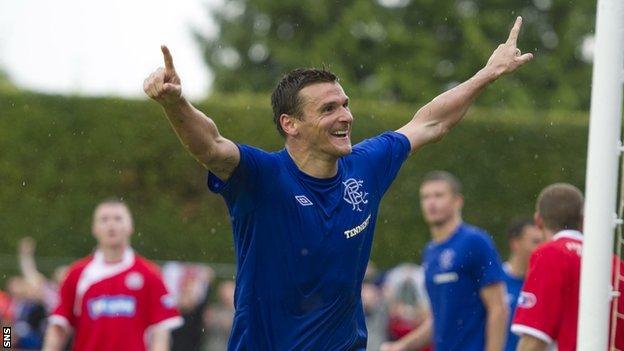 The new Rangers started life outside the top flight of Scottish football with a victory over Brechin City - but only after extra time at Glebe Park.

It looked like they would stroll to victory in the first round of the Ramsdens Cup when Andy Little fired them ahead after four minutes.

Andy Jackson, though, pounced on a defensive error to slot the equaliser two minutes before half-time.

But Lee McCulloch, who set up the opener, headed in after 102 minutes.

Rangers' first appearance in the Challenge Cup - the competition for senior clubs outside of the Scottish Premier League - followed the old club's financial meltdown.

However, despite the exit of a number of top players unwilling to play in Division Three this season, the new Rangers created by Charles Green's consortium still featured some familiar faces.

Receipt of a Scottish Football Association membership, albeit temporary because of continuing negotiations over conditions of entry, had gone to the wire on Friday.

It meant that their first signings - former Hearts midfielder Ian Black and returning forward Little - had to be listed as trialists, while manager Ally McCoist could only muster enough personnel to fill four of the five substitutes places.

Lewis MacLeod, an 18-year-old midfielder, was handed a first-team debut, while 17-year-old forward Barrie McKay made his first start and was the first to threaten with a dipping long-range drive that slipped just over the crossbar.

Rangers' visit had ensured a sell-out crowd and the visitors' loyal following were given early cause to cheer when veteran McCulloch set up Little for the opener.

The Northern Ireland striker had already tested Brechin goalkeeper Michael Andrews with a low drive and this time flicked it beyond the summer signing from Montrose.

Craig Molloy forced Alexander into a good save with a low drive following some slackness from Wallace, but the flow of pressure was on the Brechin goal for most of the first half.

Andrews saved well from Broadfoot and Wallace, while Little had a decent shout for a penalty rejected by referee George Salmond following a challenge from behind by Johnny Brown.

Brechin survived and, when Broadfoot mis-judged a header, new Brechin signing Jackson held off a half-hearted challenge from Goian and rolled the ball under Alexander.

Molloy should have done better than volley over the visitors' crossbar from 12 yards shortly after the break.

However, as the summer rain swept across Glebe Park, it was the Second Division part-timers whose stamina was being tested as Rangers lay siege on the Brechin goal.

McKay had a close-range effort deflected over and there were strong claims for a penalty as a McCulloch drive struck Paul McLean's arm.

Brechin continued to hang on to their dream of a famous victory into added time and went close themselves through a David McKenna drive that was deflected just over.

However, McCulloch rose to power a header into the net from a MacLeod corner to give Rangers a winning start to their adventure under the auspices of the Scottish Football League.