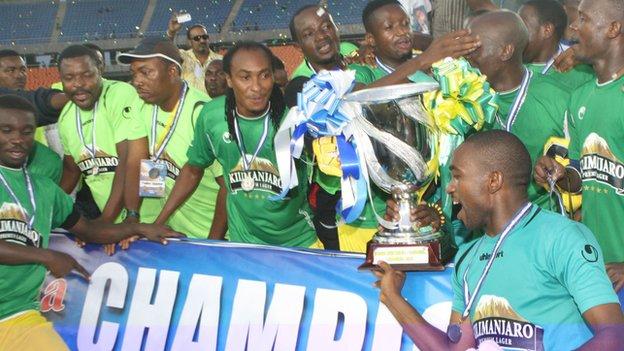 Hamis Kiiza scored just before half-time before Said Bahanuzi added another in stoppage time to delight over 30,000 fans inside the National Stadium.

"The secret is our coach, he gave us directions and we followed - he is a good coach," he told BBC Sport.

"We did our best, and now we are very happy. We have fought hard throughout and we won. We are the champions."

Yanga received prize money of US$30,000 for winning the title from tournament sponsor President Paul Kagame, while Azam were given US$20,000 for their efforts and Vita Club of DR Congo, who finished third after beating APR of Rwanda 2-1, took home US$10,000.

Saintfiet only took charge a month ago and winning this highly-regarded regional East and Central African club tournament represents a major achievement.

Meanwhile, Azam's English coach Staurt Hall was proud of his side's display despite the defeat.

"We had all the possession but did not do anything with it," he lamented.

"So we are very proud of that," he said.

Azam team will represent Tanzania in next year's Confederation Cup and Hall believes his team has shown maturity to do well.

"We are a young squad, and playing Vita and Tusker of Kenya was a good experience for the Confederation of African Football competition - we will be ready," he added.