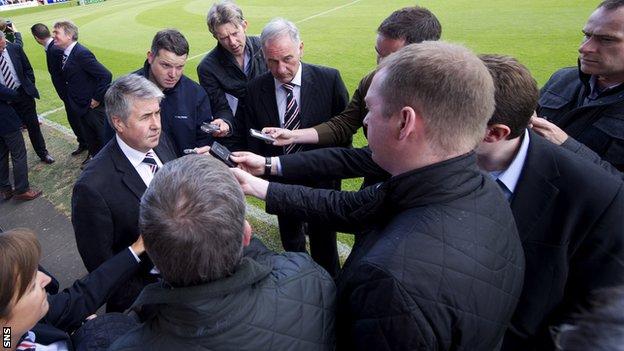 Charles Green has claimed that bigotry was among the motives for punishing the new Rangers for the misdemeanours of the old Ibrox club.

Rangers' chief executive was speaking as his new club started life in the Ramsdens Cup against Brechin City.

A statement from Celtic said it was a matter for the football authorities.

Rangers went into administration last season and Green's Sevco consortium created a new company after failing to prevent the old one being liquidated.

The Scottish Football Association said Rangers would only be given membership if they accepted sanctions for unpaid football debts by the oldco.

Green's consortium accepted those, but issues relating to media rights and an SPL investigation into how the old Rangers paid players in the previous decade held up the process to such an extent that only a conditional membership was given to allow them to face Brechin while more negotiations take place.

On Saturday, Green also claimed that the olcdo's rivals, Celtic, "have had three different companies in their lifespan", although Companies House records state that the Parkhead club has had the same incorporation number since 1897.

"My frustration's been, after 30 years of business, I have never experienced anything like the last three months," Green told BBC Radio Scotland.

"Some of the business decisions that have been made really have been nonsensical from a business point of view.

"One of the meetings I went to, one of the reasons why SPL chairmen were under pressure to do something with Rangers was they wouldn't buy season tickets until Rangers were thrown out of the league."

Asked to expand on what he meant by bigotry, Green turned to pressure placed on SPL clubs by their own fans not to allow the new club into the top flight.

"We've got a position whereby Rangers were thrown out of the league and these clubs are still appealing with fans to buy season tickets," he said.

"What's happened with Rangers, as an outsider looking in, although I am now an insider, is absolutely incredible where it seems to me the whole of Scotland have wanted to kick this giant club while it was down.

"I think justice has been done. The club were fined 10 points, it received an £190,000 fine, it was then put out the SPL, it was then put down to the Third Division, it has had to pay all the Scottish club debts, which wouldn't normally happen for a newco to be obliged to pay oldco's debts.

"We're also now paying European debts and there is still potential cloud hanging over the club from the SPL over EBT issues.

"I had meetings last week with some Uefa officials who say this is unprecedented in Europe."

So far there has been no response from the SPL or SFA to Green's comments.