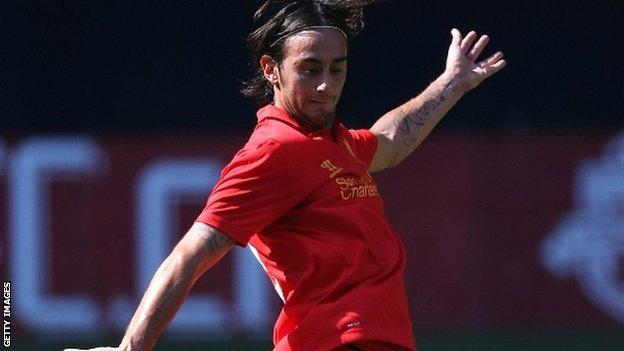 Liverpool midfielder Alberto Aquilani has completed his move to Fiorentina.

The Italian joined the Reds from Roma for £20m in 2009 but started in only nine Premier League matches.

New manager Brendan Rodgers gave the 28-year-old permission on Sunday to fly to Italy from Liverpool's US pre-season tour. No fee has been disclosed.

Aquilani was allowed to discuss joining Serie A Fiorentina after being told he did not feature in Rodgers's plans.

Despite spending the last two seasons on loan at Juventus and AC Milan, his wages - in excess of £5m per year - were a drain on the Anfield club's funds.

On Friday morning Fiorentina's honorary president Andrea Della Vale hinted a deal was close. "He is the big name signing that we were waiting for," he said.

Aquilani's new team-mate Francesco Della Rocca, added: "Alberto is a great player and he will do really well at Fiorentina.

"He wants to bounce back from what has not been a very positive time for him at Liverpool and I am convinced that it will be a big chance for him in Florence."

Rafael Benitez brought Aquilani to Anfield as a replacement for Xabi Alonso, but he struggled with injury and only made 26 appearances in his first season.