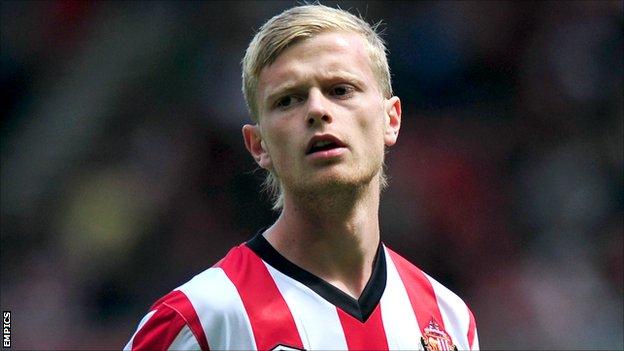 Sunderland manager Martin O'Neill has said Ryan Noble would benefit from bulking up physically in his development as a top flight striker.

Noble, 21, has figured in the Black Cats' pre-season campaign and scored an impressive individual goal during the Peace Cup victory against Groningen.

"He knows in a physical sense he needs to get stronger, and hold the ball up better," O'Neill told BBC Newcastle.

"But he knows where the net is and continues to improve in his game."

Sunderland are currently chasing Wolves striker Steve Fletcher, and have offered the Championship club £10m for the player

He added: "The Premier League is an unforgiving league, it's as physically strong as it has been for some time.

"That doesn't mean that somebody slim cannot perform in it, and in fact there are a number of excellent players who are not the heaviest."

Another of O'Neill's squad to come through Friday's 1-0 friendly defeat by Hartlepool United on Friday was David Meyler.

The 23-year-old missed the first part of last season with a ruptured cruciate ligament, the second in as many seasons, but is among the players looking to break into the Wearsiders' squad.

"I have known David for a few months and his attitude is always spot on," O'Neill added.

"He's a great character around the dressing room, and what he wants is a run of games, but like most players I'm unable to promise anything.

"He's played the three games now and in terms of his fitness, which is something that he lacked last year because he didn't get enough playing time, that is something he is working hard on."