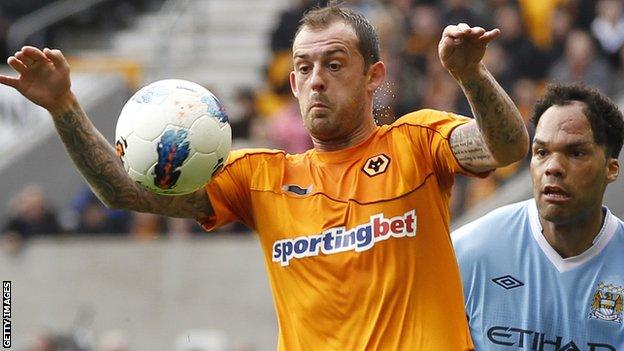 Wolves striker Steven Fletcher has asked to leave the club after Sunderland made a £12m offer for the player on Tuesday.

The 25-year-old said on Twitter: "Just handed in a transfer request just to let the fans know where I am at right now.... #headsgone."

The Black Cats' bid is thought to be close to Wolves' valuation.

Fletcher's former club Burnley will be due 15% of any profit Wolves make on a player they paid £7m for in 2010.

Wolves responded to the tweet with a club statement: "Wolves can confirm that Steven Fletcher has handed in an official transfer request.

"The player's frustration stems from the fact that several bids have been rejected for his services, none of which meets the club's valuation.

"As previously stated, no player will leave Wolves unless the club's valuation is met."

Sunderland are short of attacking options following the departures of Asamoah Gyan and Nicklas Bendtner.

Fletcher has two years remaining on his contract at Molineux, leaving Wolves chief executive Jez Moxey in a strong position to negotiate the best possible deal. O'Neill has made Fletcher, who scored 12 Premier League goals last season, his prime attacking target this summer.

No Sunderland player reached double figures in goals last season, with Bendtner and Stephane Sessegnon the top-scorers with eight.

Fletcher has suffered Premier League relegations with Burnley and Wolves during the past three seasons, but his goals-to-games ratio is better than one in three.

121 comments
Back to top
unknown