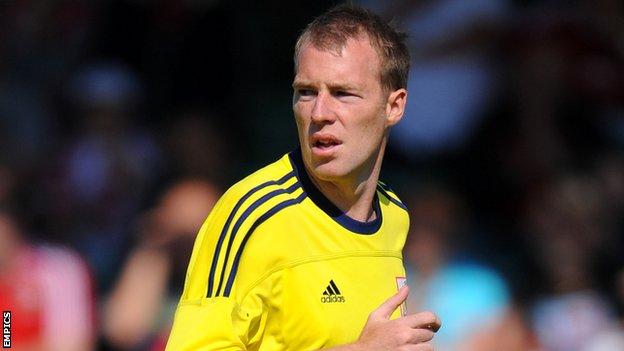 Bristol Rovers striker David Clarkson says the chance to work with Mark McGhee again was a factor in his move.

The 26-year-old signed a two-year deal at the Memorial Stadium after being released by Bristol City last season.

Clarkson worked with McGhee during his spell at Motherwell before a reported £600,000 move to Ashton Gate.

"I think he brought the best out of me as a player so I'm hoping now just to get back in the swing of things," Clarkson told BBC Radio Bristol.

"There were clubs out there saying they were interested, but I get to stay in the area, I'm settled here, and working with the manager before is one of the biggest things which attracted me as well."

Having scored 57 goals in 251 appearances for Motherwell, Clarkson netted just 11 times during his three-year stay at City.

The twice capped Scotland forward had not played for Bristol City since last November and spent a month on loan at Brentford last season.

"I just want to play football and hopefully I'll get my chance playing here," he said.

"There was a lot to think about dropping down the leagues.

"I wanted to get some training in before I got a club and the gaffer has been kind enough to offer me a contract. It's good to get it sorted now and I can try and get back in the team.

"It's a good club, a club that's going places and hopefully I can be part of that."