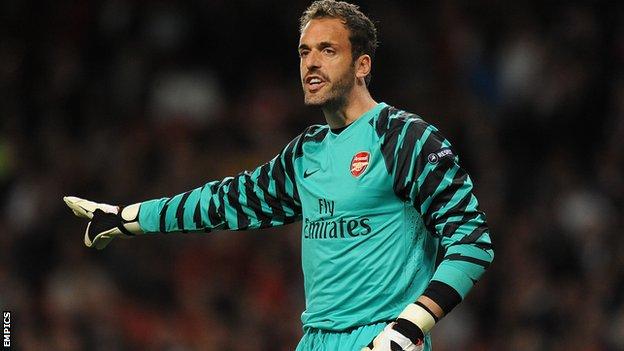 Almunia, 35, and Hall, 31, have agreed one-year contracts and will add experience to the Hornets squad.

The other five players are on season-long loans from Udinese and Granada - both owned by the Pozzo family, who took over Watford last month.

"We are constantly looking to add quality here for Watford and this is a task which will be ongoing throughout the season."

Almunia, who made 175 appearances for Arsenal after joining them in 2004, will fill the gap left by Scott Loach's departure to Ipswich.

And Hall, who has arrived at Vicarage Road after a career which has seen him play for Oldham, Southampton, Crystal Palace, Wigan and briefly on loan at Newcastle, as well as QPR, has the task of replacing Adrian Mariappa, who left the club to join Premier League new boys Reading.

Among the others, only Glasgow-born Anya, 24, has played league football in England before, having had spells with Wycombe and Northampton before heading for Spain, where he spent last season on loan at Cadiz from Granada.

His club-mate Pudil, 26, and Udinese midfielder Abdi, 25, are both full internationals, for the Czech Republic and Switzerland respectively, and have impressed in pre-season friendlies for Watford.

Vydra, 20, has represented the Czech Republic at youth level, while Udinese club-mate Beleck, 19, was born in Cameroon and played for AEK Athens on loan last season, scoring five goals in 27 appearances.

However, some of the loan signings may cause misgivings among some fans.

Prior to the takeover by the Pozzos, and the installation of Zola as manager, the Watford Supporters' Trust expressed concern about the possibility of the club being used as a 'nursery' to provide experience for youngsters from Udinese.