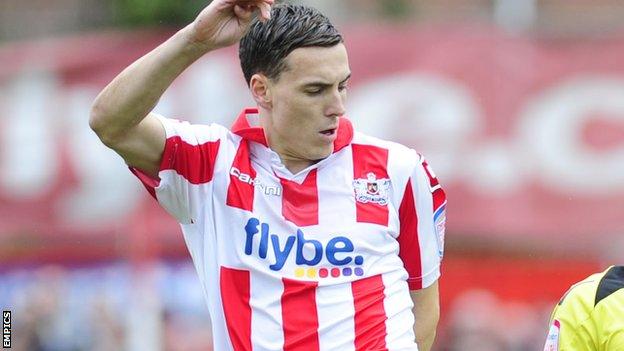 Exeter City attacker Alan Gow says he would consider rejoining Rangers at some point in the future.

Rangers are set to play in the Scottish Third Division as a newco after the old company was liquidated.

Gow, 29, who signed a two-year deal at Exeter in May, played twice for Rangers between 2007 and 2009 and is open to a future return to Ibrox to help them.

"I'll always want to play for Rangers, so if the opportunity came about I'd always go," Gow told BBC Sport.

"I'm a Rangers fan through and through. I could have probably moved to bigger English clubs instead of going to Rangers and maybe doubled my money, but I wanted to play for Rangers."

Gow left Gers for Plymouth Argyle in 2009 and had spells at Hibernian, Motherwell, Notts County and Indian side East Bengal before joining Exeter, initially on a short-term deal, in March.

And he says he is enthusiastic about Exeter's chances for the upcoming season in League Two.

"The manager's made a few good signings because we did lose a few big important players from our side," added Gow.

"We're optimistic and it's great having the young lads coming through.

"But there's the experience as well of people who've played at a higher level to help the young boys come through and hopefully that'll stand us in good stead for the season."