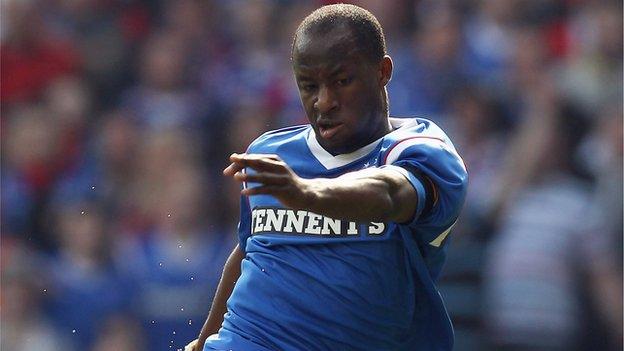 Nigeria striker Sone Aluko has revealed the driving force behind his move to Hull City was the chance to reunite with manager Steve Bruce.

The 23-year-old, who signed a two-year deal with the English Championship side last week after leaving troubled Scottish side Rangers, played under Bruce when the pair were at Birmingham City.

Aluko came through the ranks at St Andrew's and although he left before making an impact with the senior side, he said it was the prospect of being managed again by Bruce that was too good to turn down.

"When you've got a manager like Steve [Bruce] interested, you have to listen," he told BBC Sport.

"He obviously already knew me from my time with Birmingham and he has retained a lot of the staff from his Birmingham days so hopefully that will help me settle down quickly.

"To be honest, his ambition to take Hull into Premiership quickly was the biggest draw for me," added Aluko, who scored 12 times in 23 appearances for Rangers last season.

"The main reason for moving here was their ambition to move into the Premiership and take the club forward quickly.

"I had a very positive meeting and calls with the manager and another meeting with the owner and they spoke about the desire to move into the Premiership - you can also see it with the players they have signed.

"Also from a football point of view it was important for me to hear I'll be an integral part of the team, and how [Bruce] saw me being used fit the role I was looking for, too.

"My immediate target is to really continue the good form I finished with last season and continue to score and create goals for the team in the push for promotion."

The Super Eagle only linked up with Scottish side Rangers in November 2011, but the financial troubles at Ibrox forced him to leave the club.

Aluko rejected the opportunity to transfer his contract to Rangers newco, allowing him to move on as a free agent.

"I'm glad to complete the move to Hull. For me it wasn't really a long wait, I always wanted to take my time and make a solid decision," said Aluko.

"The manager likes his teams to play good football and play with freedom so with him, the staff and the squad we have here I'm very optimistic."

He becomes the third Nigerian after Austin Jay-Jay Okocha and Seyi Olofinjana to play for Hull.