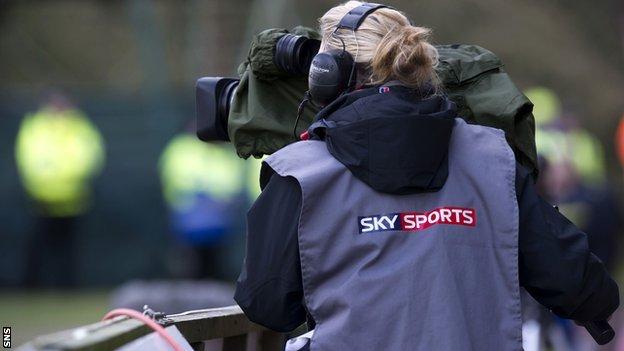 Broadcaster Sky Sports has confirmed it has reached agreement with the Scottish Premier League to continue its coverage of Scottish football for at least another five years.

Five live Rangers fixtures in Division Three are included in the deal along with 30 from the top flight.

There had been fears that a TV deal might disappear as a result of Rangers dropping out of the SPL.

But no figures have yet been released about the value of the new deal.

The SPL had agreed a TV deal worth £80m over five years with Sky and fellow broadcaster ESPN before the old Rangers slipped towards liquidation.

And SPL chief executive Neil Doncaster and Scottish FA counterpart Stewart Regan had both warned of dire financial consequences should the new club not start life in Division One.

Negotiations that followed Rangers being voted into Division Three by the Scottish Football League clubs have produced a new deal, with coverage beginning with Celtic at home to Aberdeen on Saturday, with a kick-off time of 12:45 having already been announced to suit television coverage.

Rangers' first game in the Third Division, away to Peterhead on 11 August at 12:45, will also be broadcast live.

The new deal is subject to ratification by the SPL clubs on Friday.

Barney Francis, managing director of Sky Sports, said: "We've supported Scottish football since we started, over 20 years ago, and have always wanted to continue that commitment.

"Our viewers will see the SPL for five more years and our schedule includes the opening league match for Celtic.

"We will also follow Rangers as they plot their way back to Scottish football's top flight.

"Clubs now have certainty over their income and exposure across the UK and Ireland and we look forward to the new season."

Meanwhile, the SFL has rearranged the Ramsdens Cup second-round tie between Rangers and Falkirk for Tuesday 21 August, with a 19:45 kick-off.