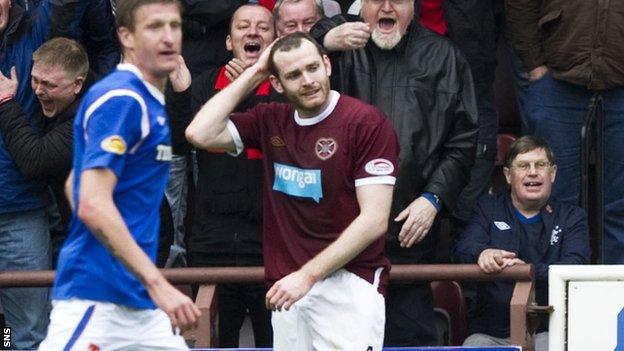 Rangers' capture of Craig Beattie is in doubt, with manager Ally McCoist still waiting to hear if the former Hearts player will sign on at Ibrox.

The striker who rejected a new contract at Hearts has been made an offer after training at Murray Park.

McCoist told Rangers' website: "Charles Green has spoken to Craig Beattie's agent and he made him an offer.

"As yet, I have not heard back from him or from Craig, but hopefully I will do in the next 24 hours."

As far as I know, both Carlos and Dorin are staying

McCoist was speaking after making former Kilmarnock midfielder Dean Shiels his second new signing since Rangers were given Scottish FA membership on Friday.

The Rangers boss has to assemble a squad before a 12-month transfer embargo comes into effect on 1 September.

And midfielder Ian Black, who was Beattie's team-mate as Hearts won the Scottish Cup last season, was secured on Saturday as striker Andy Little extended his stay at Ibrox.

Former Celtic forward Beattie, who had joined Hearts in January after being released by Swansea City, has had offers from Notts County and South African club Bidvest Wits but was holding out for an offer from Rangers.

"We will push a few names forward and see where we go," said McCoist about his possible signing targets.

A number of other first-team regulars refused to transfer their contracts to the new Rangers as the old club headed for liquidation and have since sealed moves elsewhere.

However, McCoist is also hopeful of retaining the services of international defenders Carlos Bocanegra and Dorin Goian, who both featured in Sunday's Ramsdens Cup tie against Brechin.

"As far as I know, both Carlos and Dorin are staying," he said.

"We don't want to lose the spine of the team and those two centre-backs make up a great part of our team, so hopefully they will remain with us."