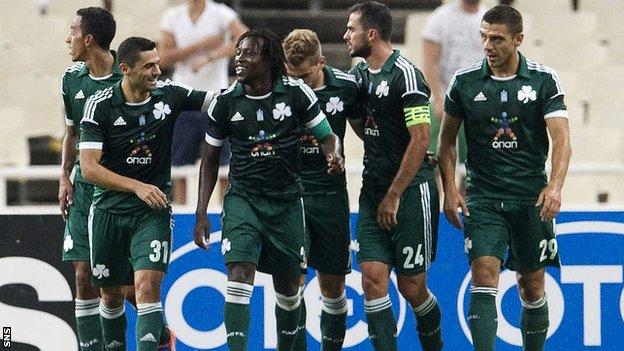 Motherwell will enter the Europa League play-off round after Panathinaikos knocked the Scottish side out of the Champions League qualifiers.

Trailing 2-0 from the first leg, 'Well threatened when Keith Lasley's shot was palmed away by Orestis Karnezis.

A superb free-kick by Lazaros Christodoulopoulos gave the Greek side a 51st-minute lead.

Motherwell's first foray into the Champions League was a predictably short one, having been drawn against a side with an impressive European pedigree.

Panathinaikos looked in a hurry to settle the tie and striker Toche had two good chances to score in the first five minutes.

The Spaniard's 25-yard striker forced goalkeeper Darren Randolph to parry, while the 29-year-old should have done better moments later after going through on goal but he could only shoot wide.

Motherwell were on the back foot for long spells but skipper Lasley did get a glimpse of goal and his fierce effort from just outside the penalty area was pushed away by keeper Orestis Karnezis.

With the home side content to wait for a chance on the break, the visitors held out without too much trouble for the remainder of the first half.

Panathinaikos made another bright opening in the second period and only Simon Ramsden's last-gasp clearance prevented Toche from heading home Sissoko's cross.

And the breakthrough came when Greece international Christodoulopoulos summoned up a moment of magic.

There seemed to be little danger when Shaun Hutchinson fouled Sissoko 35 yards from goal but the forward, who also scored the opener at Fir Park, magnificently fired into the top corner via a slight nick off the post.

Panathinaikos continued to push forward and they had a claim for a penalty waved away when the ball struck Adam Cummins on the arm.

Toche was once again denied by Randolph, who magnificently saved the striker's point-blank header.

The one-way traffic continued and substitute Mavrias - scorer of Panathinaikos' second goal last week - extended the lead on the night in the 75th minute by racing away from Hutchinson and shooting past Randolph from 18 yards.

With Motherwell wilting, the scoring was completed eight minutes later.

Kostas Katsouranis broke down the right for the hosts and his cross into the centre was missed by Stevie Hammell and slotted home by Sissoko.

Panathinaikos were cutting open the visitors with ease and Randolph had to make a smart save with his legs in inury time to prevent Zeca from adding to the hosts' tally.