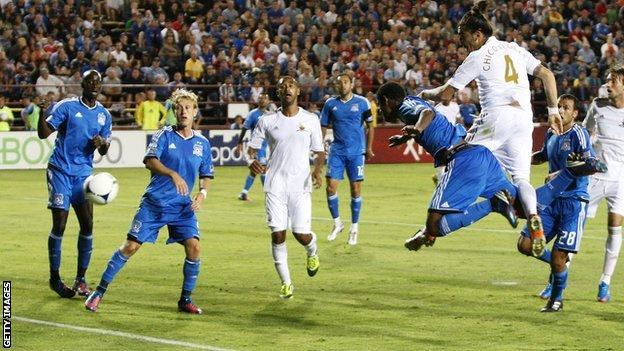 Swansea City completed their three-game tour of the United States with a 2-2 draw against MLS side San Jose Earthquakes.

Michael Laudrup's side were leading 2-0 with ten minutes remaining only to be denied by two late goals.

Danny Graham had given the Swans the lead on 41 minutes before defender Chico scored with a second half header.

But two headed goals from Steven Lenhart in the final ten minutes secured a draw.

Both sides created chances to open the scoring at Buck Shaw Stadium before Graham gave his side the lead four minutes before the interval.

Goalkeeper Michel Vorm kept the Swans in the lead with a fine save to deny Sercan Guvenisik before the Welsh side doubled their advantage on 59 minutes.

Summer signing Chico headed home his first goal for the club following a cross from Ashley Williams before they were hit with by a late double by substitute Lenhart.

With 10 minutes remaining Lenhart turned in a cross from fellow substitute Shea Salinas and the striker equalised with another header in the 85th minute.