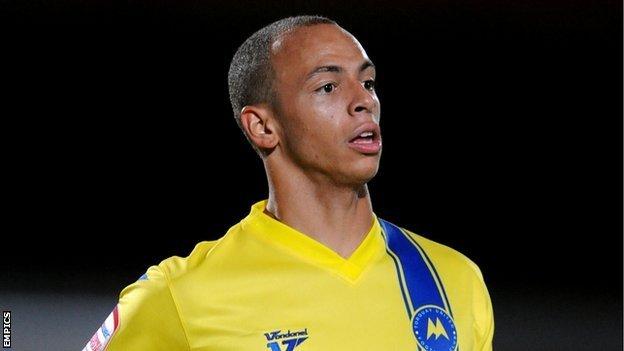 Torquay United manager Martin Ling has taken Lloyd Macklin off the transfer list after the forward impressed him during pre-season.

But Ling put Macklin on the transfer list in May saying that he must improve his performances for the Gulls.

"Lloyd will be coming off the transfer list, we're going to run with him for this year," Ling told BBC Sport.

"He tells me that's what he wants to do and I've said 'go and show me that's what you want to do' and in the last three games I think he's done that.

"He could be a good asset if he can keep performing like he has done."

Macklin, who had a trial at Hereford in July, scored the first goal in Torquay's 3-3 pre-season draw with Exeter City on Tuesday night as he lobbed Grecians goalkeeper Artur Krysiak.

"But he seems to have the bit between his teeth and wants to follow it through.

"You can only judge him on what he does on the football pitch and in the last three games he's had for us he's been good, so I've taken him off the list and put him in our 22-man squad."

And Macklin, who had a loan spell at non-league Salisbury City last season, says he is grateful that his manager has acknowledged his will to get back into the side.

"I've come back looking to prove everyone wrong and hopefully I'll have a better season that last.

"It's good to see that my hard work's not going unnoticed, so hopefully I can push on now and get that first team place.

"It's been frustrating because I know what I can do, but when it's come to it I've not really done it, so hopefully this season I can push on and get it done and get into the first team," he told BBC Sport.