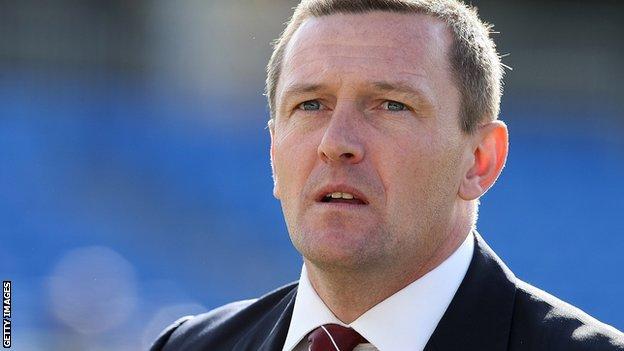 Northampton Town manager Aidy Boothroyd admits that he still needs to bring in a new goalkeeper before the start of the League Two season.

Boothroyd told BBC Radio Northampton: "I would have liked him [a goalkeeper] in yesterday, but I want to get the right goalkeeper.

"Getting the right characters in is of paramount importance."

The Cobblers' boss also remains in the market for a central defender.

Anthony Charles and Kelvin Langmead have played every minute of the Cobblers' pre-season campaign, but a move for free agent Clarke Carlisle remains a possibility.

"Clarke Carlisle would be absolutely perfect for us because he has a voice and a presence." said Boothroyd.

"But he has a decision to make on whether he continues to play professional football, or whether he gets really heavily involved with the PFA or if he goes to do his TV work.

"Whatever he decides to do is fine, but having said all of that, we can't pin all our hopes on one player. So I've got two or three others I'm monitoring and I'll have a look at in the next few days."