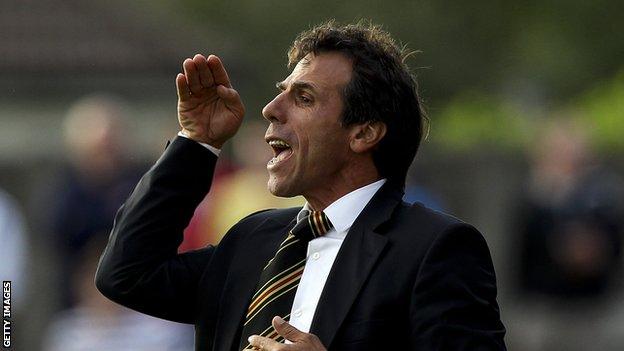 Watford manager Gianfranco Zola has backed his seven new signings to make an impact at the Championship club.

Manuel Almunia and Fitz Hall have joined on one-year contracts while a further five players have signed season-long loan deals.

He told BBC London 94.9: "The idea is to create a mix of experience and youth that, in my opinion, will be helpful for each other.

"I am sure that the players that have arrived will make an impact."

He added: "The idea is to make an environment where potential younger talents are guided by experienced and positive players."

Meanwhile the former West Ham boss has praised the commitment shown by his players in pre-season training since he replaced Sean Dyche at Vicarage Road last month.

"They are very receptive, willing to work and play with new ideas," Zola added. "It's fantastic for a manager.

"My staff and the staff that were already there have mixed together very well and are creating a very good environment to work in.

"We're creating a good environment at the training ground and making it enjoyable and good for the players to learn and improve their ability.

"The players have responded well and hopefully they will learn. So far it's been excellent."