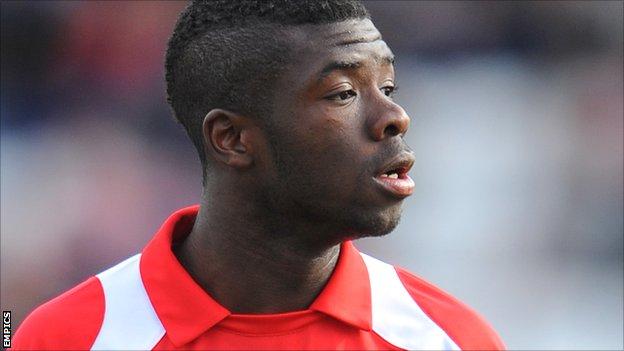 Tranmere Rovers have signed free agent Abdulai Bell-Baggie on a one-year contract after a successful trial.

Manager Ronnie Moore, who signed Bell-Baggie on loan whilst in charge of Rotherham, said: "He's done well since he has been here.

"He's a very attacking player who will twist and turn and give defenders a headache. I think he will be a real crowd favourite."

Speaking to the club website, Bell-Baggie added: "The manager has been a massive help to me since I went to Rotherham at the age of 17.

"I want to kick on and help the team finish as high in the division as possible."

Meanwhile, new Tranmere captain James Wallace is sure that Moore will sign a capable replacement for striker Ben Burgess.

"I've got confidence in the manager," Wallace told BBC Radio Merseyside. "He'll bring someone in that will be the same as Ben or even better."

Former Everton striker and free agent Francis Jeffers is still training with the League One club, while teenager Max Power has been scoring regularly during pre-season.

"Max has got great ability and it's just about maturing for him at the moment," added midfielder Wallace, who joined Tranmere permanently in June following a loan spell at Prenton Park last season.

"He's so passionate about the game and he'll have a great future.

"The fact that we've lost Ben is a bit of a blow for us.

"We're a little bit low on numbers at the moment so it's a bit of a mixture with a few of the youngsters getting involved, but the camp is good and we're looking forward to the start of the season."