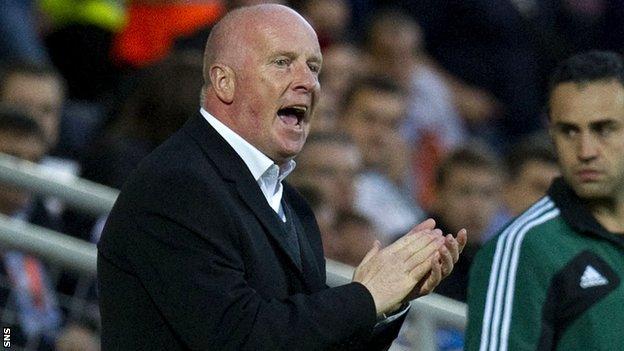 Peter Houston believes his Dundee United side can get the away victory they need against Dinamo Moscow to reach the Europa League play-off round.

United were twice pegged back as Dinamo claimed a draw in the third qualifying round first leg at Tannadice.

"That will be difficult to achieve but where there's hope we'll still go and attack them."

I think they can be vulnerable at the back

Willo Flood and Keith Watson put Houston's side in front but Igor Semshov and Aleksandr Kokorin registered away goals for the Russian side, with Kokorin's deflected strike beating Radoslaw Cierzniak in injury time.

"We worked very hard," said Houston. "We gained confidence. We're a young side, a very young side and we're playing against good players, they're a good side.

"We scored a couple of goals and we could've scored more. The huge disappointment is that it [Kokorin's goal] has taken a wicked deflection and looped over Rado just in the last minute or so but I can't fault our players, they were magnificent.

"If we play like that every week in the SPL, we'll win most games.

"I think they can be vulnerable at the back and the best way for us to play is going forward so you never know. Stranger things can happen. We'll go and try and win the match."

"He's got bits of his game that he has to work on but his shot-stopping's absolutely magnificent and great credit to him, he kept us in it at periods when we needed to be kept in the game," added Houston.

"He was excellent and I look foward to seeing him throughout the season."

"We looked at the team and how they played last year and I can see great changes to their game. There has been an improvement."