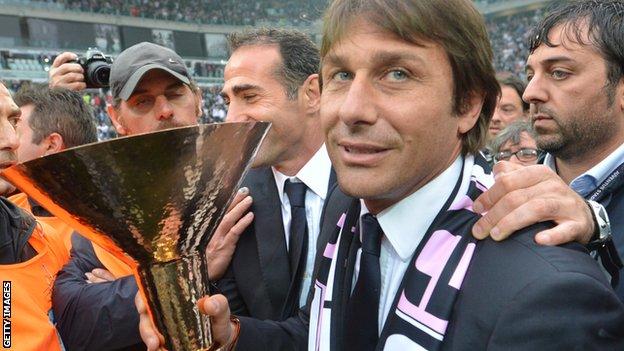 Italian football authorities are seeking a 15-month ban for Juventus coach Antonio Conte over claims he failed to report alleged match-fixing while at Siena.

In plea-bargaining, Conte's lawyer had agreed a three-month ban with prosecutor Stefano Palazzi, but an Italian Football Federation (FIGC) tribunal deemed that insufficient.

Further talks broke down and Conte will now face a full sporting trial, while Siena will be deducted six points for the new Serie A season.

The matches at the centre of allegations are the 2-2 draw with Novara and the 1-0 defeat by Albinoleffe in May 2011. Both were Serie B games.

The Italian Football Federation says it aims to reach a verdict in the case of Conte by 10 August.

In total, 13 clubs and 45 players and training staff face disciplinary action as part of a larger investigation into match-fixing ('Calcioscommesse") in Italian football.

Conte, who guided Juventus to the Serie A title in May, was cleared of any direct involvement in match-fixing last week and he originally denied all charges before changing tack and seeking to plea bargain.