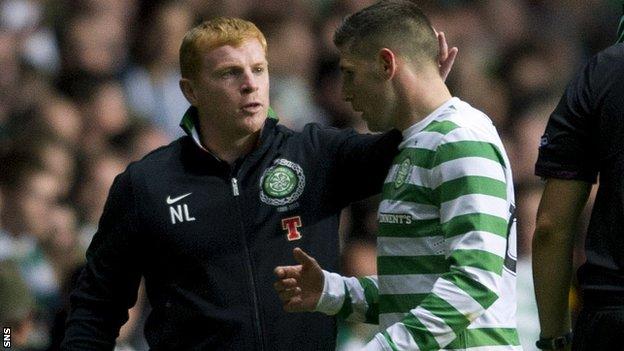 Celtic manager Neil Lennon is confident his side can cancel out HJK Helsinki's away goal when the two sides meet again next Wednesday.

The Finns took the lead in the second half of the Champions League third qualifying round first leg in Glasgow but Celtic recovered to win 2-1.

"With the amount of chances we created I feel we can score away from home," Lennon told BBC Radio Scotland.

"The most important thing would be to try and keep a clean sheet."

I think we'll be better out there

Rasmus Schuller's opener stunned the Celtic Park crowd two minutes into the second half before goals from Gary Hooper and Charlie Mulgrew gave Lennon's side a first-leg advantage.

However, a 1-0 win for HJK in next Wednesday's return at the Sonera Stadium would send Antti Muurinen's side through to the play-off round.

"It's obviously bitter-sweet with the away goal but to come away with a victory is pleasing.

"They played very, very well and created a lot of chances. I was pleased with the fitness, they kept going and that was excellent.

"We started off really well. We could've been a couple up. With a bit better finishing, bit more quality in the final third, we'd have been comfortable winners.

"[HJK's opener] is a poor goal from our point of view, a lot of luck went with it as well.

"I think we'll be better out there. Maybe a week down the line we'll be a lot fitter, a lot sharper and it gives us a lot to work on for next week."

Muurinen was pleased with HJK's away goal and praised the visitors' resilient approach.

"The result mattered most and we have a good chance in the second game," he said.

"Our team fought with great spirit.

"The tempo Celtic played at wasn't what we were used to and that is worrying for the second leg, but I still believe we have a chance."