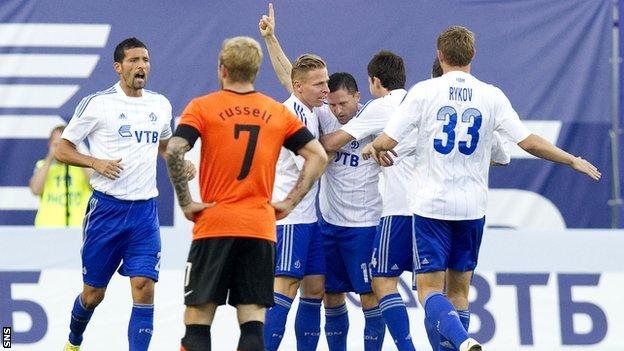 Igor Semshov, who scored Dinamo's first in last week's 2-2 draw at Tannadice, fired the Russian side ahead in the third minute of the second leg.

Outclassed United's focus will now return to domestic matters, their next match against local rivals Dundee a week on Sunday.

Peter Houston's side travelled to Moscow buoyed by their spirited performance against Dinamo last Thursday but knowing they had to score to stand any chance of progressing.

And their task was made all the more difficult when Semshov met Marko Lomic's low cross and planted a shot into the bottom left-hand corner from the edge of the box.

The home side, being managed for the first time by caretaker Dmitri Khokhlov following seemed keen to make an impression and the second goal came when Balazs Dzsudzsak weaved past Keith Watson and crossed for Kokorin to bullet a header past Radoslaw Cierzniak.

Dinamo were waiting to pounce on any opportunity and Kokorin was denied by the outstretched foot of Cierzniak after United had failed to deal with a long ball.

The Polish goalkeeper then spared Gavin Gunning's blushes with an acrobatic save from Kevin Kuranyi's shot, with the hosts having built the move from a stray pass by the Dundee United defender.

Another cross by Dzsudzsak was headed over by Kokorin, who was off target with a rising shot moments later as United continued to live dangerously.

A mix-up in the Dinamo defence almost let Johnny Russell in but keeper Roman Berezovsky recovered from his initial spill to ease any concerns among the Arena Khimki home crowd.

And any encouragement the visitors took from that momentary slip was soon dampened by Yusupov's stylish finish after Kokorin's pass had opened up the United defence.

However, Dundee United finished the first half strongly.

Gary Mackay-Steven appeared to be caught in two minds as the ball dropped to him at the back post off Jon Daly's header and the winger's touch let him down after he opted against the volley.

Willo Flood then tested Berezovsky with a free-kick, the keeper tipping the ball out for a corner.

Russell fired wide at the start of the second half but Dinamo were soon opening their visitors up at will again with Kuranyi nodding a bouncing long ball just wide and Kokorin too high with a shot on the break.

Mackay-Steven found space in the Dinamo box after taking a superb touch to control a Barry Douglas cross but the eventual shot was high and wide.

Yusupov's replacement Sapeta bundled his way through the United defence and beat Cierzniak from close range for Dinamo's fourth.

And the substitute got his second with a superb long-range strike that swerved into the top right-hand corner.