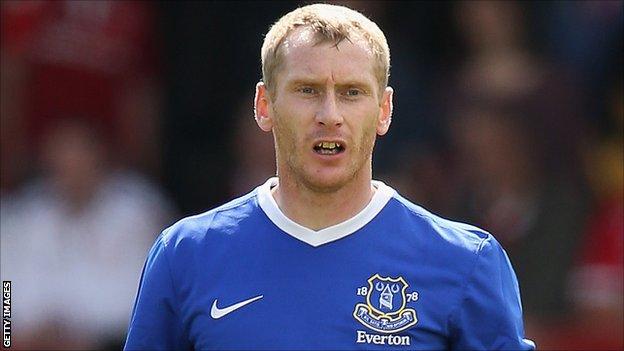 Full-back Tony Hibbert is deserving of his testimonial match after more than a decade in Everton's first team, captain Phil Neville has said.

Hibbert, 31, will be rewarded for his service to the club when the Toffees face AEK Athens on 8 August.

He has played 253 Premier League games since making his debut in March 2001.

"If you stay at a club for 10 years and play in the first team for 10 years, a testimonial is just rewards," Neville told BBC Radio Merseyside.

"Loyalty is a massive thing and there are a lot of players in the team now that have been at the club a long time. Tony's been here 10 years and he's been a stalwart.

"You can't envisage him wearing another shirt. He's Everton through and through."

The game against AEK Athens, the club against which Hibbert equalled the club record for European appearances in 2009 (a record he later broke), is the only pre-season friendly that Everton will play at home before their top-flight campaign begins against Manchester United on 20 August.

Merseyside-born Hibbert is a huge cult hero with the Everton supporters and Neville says his passion for the club is always shown best in the days before Everton are due to face their local rivals Liverpool.

"Somebody asked me the other day what he's like," said the former England defender.

"I told them to come and see him in derby week. He just comes alive. From being a quite quiet lad, who does join in the with the banter but he's quite reserved, he comes alive.

"In the squad we've got, he's probably the best out-and-out defender we've got.

"When people think of the great teams that have been built here over the last 10 years and some of the great performances, Tony Hibbert has always been in the starting 11.

"It's a tremendous achievement and I hope the fans come along and support him."