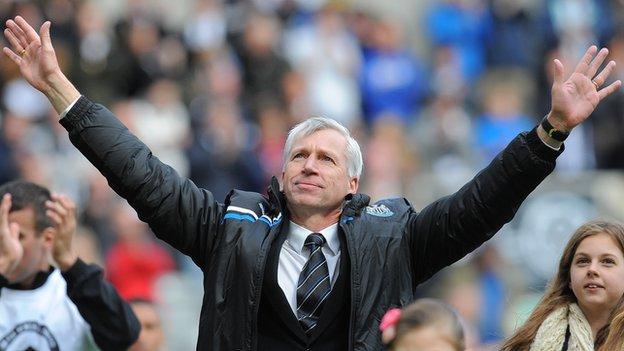 Newcastle are at last looking like a team united.

It wasn't always this way, of course. The club's recent success story is one born of dismay, fracture and reassembly.

This maelstrom of a football club had become a magnet for mishap and discord, for dysfunction and trauma. But last season, against all expectations, fury and disillusion gave way to stability and to success. Newcastle, having been tipped by many to struggle, narrowly missed out on the top four.

"If Newcastle were something of a surprise package last season, no-one will underestimate them this time around. The players and the manager know that, they will be ready for that."

There was no spell, no secret and yet the effects felt magical, as Newcastle set the Premier League alight with some thrilling football and a scarcely believable fifth-place finish - chaos to calm in 18 short months. "No-one expected Newcastle to do what they did last season," former captain Robert Lee told BBC Sport.

"I was certainly pleasantly surprised, but I am sure an awful lot of Geordies were too. They played some fantastic football, scored some great goals and were still in the hunt for a Champions League place with two matches to go, which was incredible.

"The challenge this season is going to be how you repeat that, build on it. It won't be easy and they are facing a whole different set of challenges this season."

Maintaining the momentum will not be easy. But the building blocks are all in place - harmony in the dressing room, hard work on the training field and a growing understanding between those on the terraces and in the boardroom.

Having seen Andy Carroll, Kevin Nolan and then Joey Barton leave the club in the space of six months, manager Alan Pardew has repaired the fracture between boardroom and dressing room, and rebuilt trust.

On the field, Newcastle rose up to find strength and purpose at key moments last season, scoring key goals at key moments: Hatem Ben Arfa against Bolton, Ryan Taylor against Sunderland at the Stadium of Light. The question now, is can they repeat the trick?

"If they were something of a surprise package last season, no-one will underestimate them this time. The players and the manager know that and they will be ready for it," Lee added.

"Alan has done a fantastic job. He sets his team up to be extremely hard to beat. The players work very hard for each other and in Demba Ba and [Papiss] Cisse they have two players who know how to score a goal.

"The only concern I have is that the squad doesn't have that much depth. Yohan Cabaye and Cheick Tiote were fantastic in midfield last season but I am not sure how the team would cope if both were out through injury."

Off the field the club were just as successful last season. Owner Mike Ashley and Derek Llambias, the managing director, have steadied the ship financially, making bold, if controversial, business decisions, that have become the accepted model for self-sustainability in the modern era.

Wherever possible Newcastle pay full fees up front. On players' contracts they refuse to include goal bonuses, image rights or overseas pensions.

There is an openness about the strategy. High-profile departures always cause anguish but there is now an acceptance that Newcastle are targeting youthful players and will sell them on should the right offer come along. An unemotional, business-like view, perhaps, but one that makes perfect sense in these days of austerity.

Money is being reinvested into Newcastle's youth academy and the first team will begin to reap the benefits in the coming season.

But ultimately football is not about the balance sheet.

This is a club without a domestic trophy since 1955, but there is a quiet optimism on Tyneside again, an expectancy that has long been absent.

"It's certainly going to be really difficult to replicate what we did last season," Newcastle striker Shola Ameobi said.

"Just look at teams such as Liverpool and Chelsea - I can't see them doing as badly this time in terms of where they finished in the league last season, so we are going to have to raise the bar again. If we did manage to do that, for me, it would mean finishing in a European spot again this season.

"Certainly, as I look back at my career with Newcastle, to do that this time would be our biggest-ever achievement."

The new arrivals have been low-key, in keeping with the vision of the new regime. Gael Bigirimana, recruited from Coventry, Romain Amalfitano, from Reims, and Australian centre-half Curtis Good will improve the squad. Vurnon Anita also looks a shrewd signing, a technically gifted footballer in the mould of Tiote and Cabaye.

Having overachieved last season, the man they called "Pardiola" faces a far more daunting task this time around.

No-one will underestimate his players in any of the four competitions they are competing in this season, but it remains to be seen how the Newcastle squad cope with the Thursday night/Sunday afternoon routine demanded by the Europa League.

"Europe will be an extra drain on the squad and it won't be easy to juggle and rotate. But the squad is full of good players and Alan has shown he is a clever manager," said Lee.

If history tells us anything, it is that Newcastle fans are in for another colourful season. Unlike the shirts, nothing is ever black or white at Newcastle United.