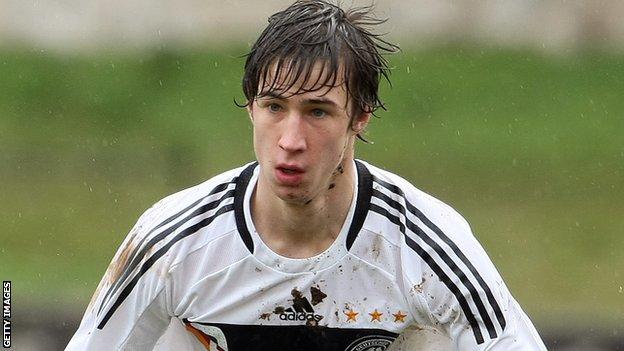 He has signed a one-year deal with the option for a second season.

The 22-year-old was brought to Mark McGhee's attention by Felix Magath - his former Hamburg team-mate and current manager of Wolfsburg.

Broghammer has impressed during a trial with Rovers and is set to be brought in as a replacement for Mustapha Carayol, who has joined Middlesbrough.

The former Eintracht Frankfurt, Hoffenheim, Stuttgart and SV Darmsadt 98 player told the club website: "I've always dreamt a little bit about playing in England, but I never thought it would happen. Then my agent called to ask if I would like to play over here and I'm really glad I came.

"When I first came here I thought it would be quite hard and it was, but it was what was needed and I think now we are all well prepared for the season.

"On a personal level, I feel fit and I think that after a couple of matches that my fitness will improve still further."

Earlier this month, McGhee revealed his happiness at Broghammer.

"I think we've all liked what we've seen," he told BBC Radio Bristol.

"Fabian has shown great ability and pace, and I think he's got a goal in him.

"He's got every bit as much pace as Muzzy but didn't get the chance to go head-to-head with him.

"I would even moot that he's got more pace, but he's a different sort of player.

"He's one we'd like to have a look at with a view to filling Muzzy's boots."