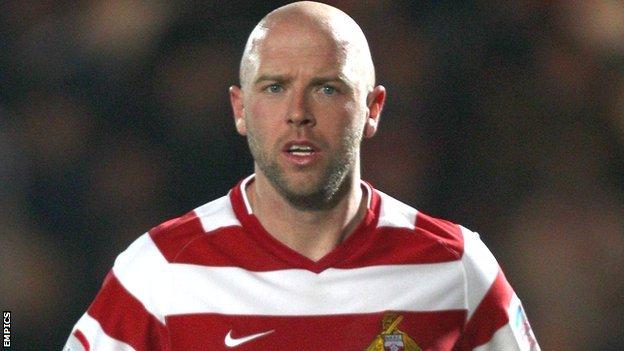 New Derby County signing James O'Connor insists he has "not joined the Rams to sit on the bench".

The 27-year-old struggled to win a regular place under Dean Saunders at Doncaster Rovers last season and started just 10 Championship matches in 2012.

But, having racked up more than 200 appearances since joining Rovers in 2006, the versatile defender will not be satisfied if he is not in the Rams first team.

"Any player, who comes to sit on the bench, shouldn't be going anywhere and I will do all I can to get into that shirt," he told BBC Radio Derby.

O'Connor can play anywhere across the back four and he is likely to provide cover at left-back for Gary Roberts. However, O'Connor does not see that as his strongest position.

"I think predominantly I am a right-back," he said.

"But obviously you play wherever the manager wants you to. The Championship's a difficult league and versatile players can help the team a lot."

O'Connor was part of the Aston Villa youth team that won the FA Youth Cup in 2002.

He was man of the match in their League One play-off final victory over Leeds United at Wembley in 2008.

O'Connor, who helped Doncaster to promotion from League One in 2008, struggled to get into the starting line-up last term as Rovers were relegated from the Championship.

The former Aston Villa youth-team product added: "Last season wasn't ideal but I will be looking to get back to my old form, it was difficult on and off the pitch.

"After being at the same club for so long there's a few butterflies about meeting a new group of players, but I can't wait to get going."

Derby start their 2012-13 Championship campaign at home to Sheffield Wednesday on Saturday, 18 August.