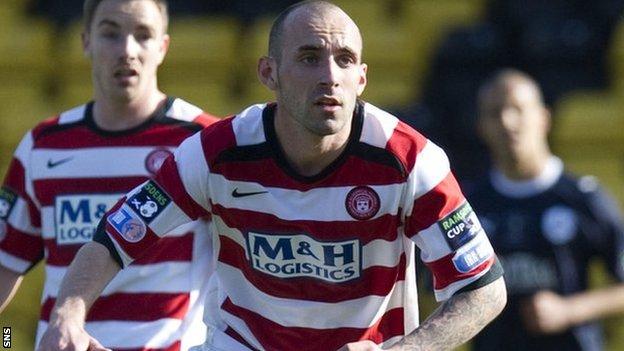 Stewart spent the latter part of last season on loan from Bradford to Hamilton in Division One.

We had a list of players we wanted, but a lot of them have signed for other clubs

The 24-year-old had started his senior career with the Bairns.

Now he will have a second shot at playing in the Scottish Premier League after Dundee became late replacements for financially crippled Rangers.

The former Celtic and Partick Thistle youth player impressed on trial as Dundee manager Barry Smith looks to strengthen the squad that finished runners-up in Division One last season.

Another former Falkirk striker, Carl Finnigan, had earlier arrived at Dens Park on a permanent deal after being on loan from St Johnstone last season.

Dundee chief executive Scot Gardiner suggested that there would be four more arrivals at Dens Park, but Smith was more coy about exact numbers.

"I am not going to set a number on it," he told BBC Scotland. "It all depends on finance and if I bring enough players in I am happy with.

"We are waiting on international clearance for Davide and Mark Stewart will sign today, which gives us more numbers and strength in depth.

"There's not a lot of money, but there is enough to maybe bring a few more in that are within our budget."

Smith admitted that it had been a struggle to do that so far.

"We've been preparing for the First Division, so we've only had three weeks," he said.

"So it has been difficult. We had a list of players we would have liked, but a lot of them, in the time when there was a bit of doubt about what league we would be in, have signed for other teams.

"Although we are strengthening, it has taken a bit of time and proved a bit harder than we thought."

Stewart helped Falkirk reach the Scottish Cup final in 2009, but the Bairns dropped to Division One and the striker won a move to Bradford along with midfielder Chris Mitchell in July 2011.

He returned to Division One on loan with Hamilton on January and scored once in 13 appearances before being released by the League Two club along with his fellow Scot.

Grassi emerged from the youth set up at Parma before moving to Cattolica in his homeland then Bonifika in Slovenia.

Spells at Merida and Sant Andreu in Spain led him to Aberdeen in 2009, but the following summer he returned to Italy with Sorrento Calcio and Seria B outfit Triestina.