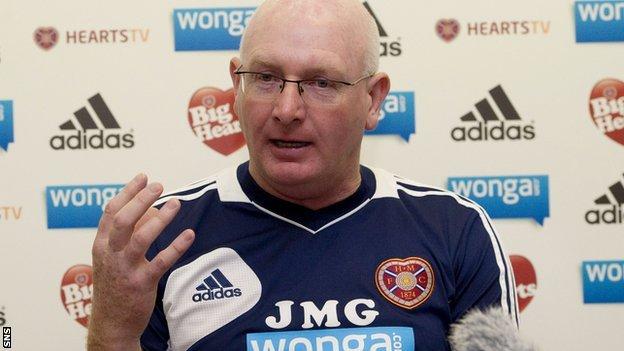 Hearts manager John McGlynn is confident his young squad can deliver success in his first season in charge at Tynecastle.

"Hearts are the third biggest club in Scotland and we want to be challenging at the top of the table and do well in the cup."

Our expectation level is to be as high as possible

Ian Black, Suso Santana, Adrian Mrowiec, Stephen Elliott, Rudi Skacel, Craig Beattie, Marian Kello and David Obua are just some of the seasoned professionals to have departed Tynecastle and McGlynn has yet to sign any players.

"We have lost some key players and are bringing in some younger players," said the former Raith Rovers manager.

"That is the route the club is going to go down, so it is up to us to produce these young players and get them in the team - the signs so far have been encouraging.

"I came here to work with young players - that was the brief I had and that is nothing new to me. You certainly can't have 11 young players, you need a backbone of experience to help them through.

"It would be helpful for the fans to be patient because we are in a transition period and these younger guys will need support, particularly when things are not going well.

"I now feel that I'm ready for the big stage and I will be very proud to go out at Tynecastle as manager of Heart of Midlothian."

With no Rangers in the top flight, McGlynn's side will be expected to challenge reigning champions and title favourites Celtic.

"It is up to other clubs in the league to make it as difficult as possible," added McGlynn.

"Maybe Celtic will be going to games thinking it doesn't matter because everyone has told them they are going to win the league.

"I'm sure Neil Lennon will be trying to make sure that is not the case. But, with Rangers out of the equation, will Celtic take their foot off the gas?

"Our expectation level is to be as high as possible."