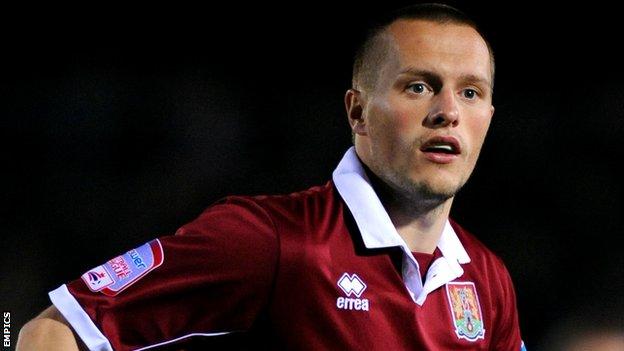 Harrad, 27, started his career at Notts County before joining Burton Albion in 2005, where he scored 69 goals in 229 appearances over a six-year spell.

Northampton signed the forward in January 2011 but he left to join Bury eight months later.

Harrad has scored four times against Cheltenham, with two goals coming in Burton's 6-5 defeat by the Robins in March 2010.

He struggled to secure a starting place in the Shakers squad, with 12 of his 27 appearances coming off the bench, and was loaned to Rotherham in February.

"Shaun has been on our radar for a very long time but we didn't think we could get him," manager Mark Yates told the club website.

"We did enquire about him last year when he went back from Rotherham but it all came from a chance conversation with one of my staff and Bury have been brilliant.

"Shaun wants to be here for the season and be part of what we want to do and it was a no brainer once we realised we could get him."