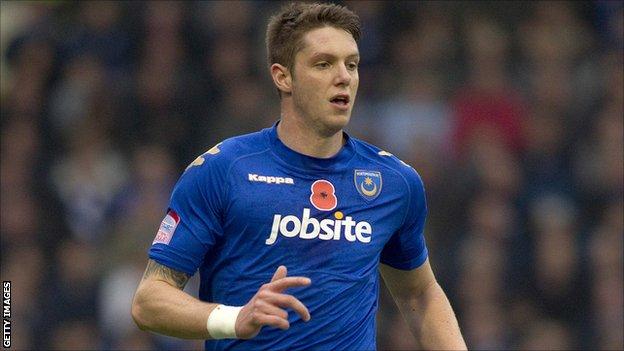 Pompey need their three remaining senior players to leave by 10 August or reach compromise agreements over their wages for the club to avoid closure.

And Halford, who left the club to join Nottingham Forest last month, is confident the trio will leave Pompey.

"I spoke to two of them on Wednesday," Halford told BBC Radio Solent.

"And they seem to be getting closer to where they want to be.

"Negotiations with the administrator (Trevor Birch) seem to be progressing quite well and there is no reason why they shouldn't have moved on and the club move on by the start of the season."

Birch has previously said there is Championship interest in Lawrence, while Ben Haim is now being linked with a move to Premier League West Ham.

The PST revealed on Thursday that they have raised £3m in pledges from supporters, a figure that includes six-figure investments from four different individuals, including their proposed new club chairman and lifelong fan Iain McInnes.

The Trust are now calling on former owner Balram Chainrai to accept their offer of £2.45m for the club as they look to save Pompey before next week's 10 August deadline set by administrator Trevor Birch.

Mordaunt has long backed the Trust's bid, and says it stands up to scrutiny.

"I think this is a credible bid and it is still building momentum," Mordaunt told BBC Sport.

"I am right behind the PST bid and I am investing my own money in it.

"Local authorities lend money all the time to other local authorities and organisations. If you look at this, this is secure investment, it is not a donation it is a loan.

"It is secured on assets that we've got at the moment and the return for the local authority and social value makes it a good investment. I am a politician, I know how tight things are at the moment, but if I was a councillor I would vote to support this.

"I think this is a good deal, but we don't have 12 months to do this, the council need to get cracking and make a decision."

The PST told BBC Sport the City Council had acknowledged their request for a £1.5m loan and were considering it.