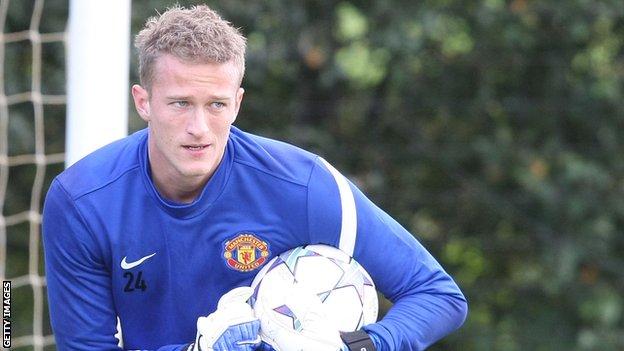 Anders Lindegaard has signed a new four-year deal with Manchester United, extending his stay at Old Trafford until the end of the 2015-16 season.

Nothing makes me more proud than wearing the Manchester United badge

The 28-year-old goalkeeper sustained a serious ankle injury in January having just forced his way into the team.

"Anders is still relatively young for a goalkeeper, he has come on leaps and bounds since joining us last year," manager Sir Alex Ferguson said.

The Dane is in the United squad for the pre-season tour of Scandinavia.

Ferguson said he was delighted that Lindegaard, who has fully recovered, had extended his contract.

"There is healthy competition in the goalkeeping department which is always good for the team, albeit a headache for me," he added.

"I am delighted he has signed a new contract and also delighted to see that he has clearly returned from the summer break in good shape after the disappointment of suffering an injury last season."

Keeper of the peace

Lindegaard added: "I'm very pleased to have signed a new contract. I'm glad and proud that the manager has shown the confidence he has in me by giving me a new deal.

"There is nowhere in the world I would rather be than right here. The competition for places is tough, as it should be in a club like this. It only makes us better as individuals and more importantly, stronger as a team.

"It's what I have dreamt of all my life and nothing makes me more proud than wearing the Manchester United badge."