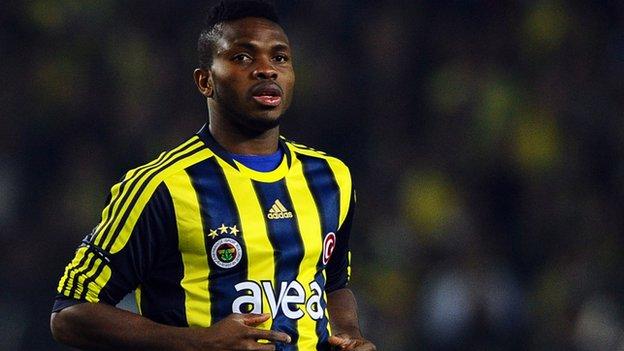 Nigerian defender Joseph Yobo is on the verge of making a permanent switch from Everton to Fenerbahce.

The English Premier League side have confirmed they are in discussions with the Turkish club, where Yobo has been on loan for the last two seasons.

Yobo made 42 appearances for Fenerbahce last season, helping them finish second in the table and win the Turkish Cup.

The 31-year-old joined Everton in 2002 from Marseille and has made 220 league appearances for the Toffees.

He was Everton manager David Moyes' first signing at the club and also became the first African player to captain the Toffees, when in 2007 he led the team out in their 2007 Uefa Cup tie against Larissa at Goodison Park.

However with Sylvain Distin, Phil Jagielka and John Heitinga ahead of the Nigerian international, Yobo left for first team football in August 2010.

After his year at Fenerbahce, in which he won the league with the Istanbul-based side, Yobo returned to Merseyside.

But the Nigeria captain returned to Turkey for a second season-long loan.

The 23-year-old, who learned his trade at Strasbourg, has played for the past two seasons with Turkish first division side Samsunspor.