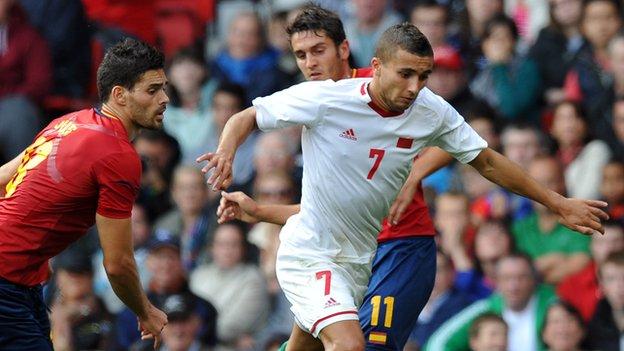 Morocco Olympic team coach Pim Verbeek has admitted his side failed to take their chance to reach the quarter-finals after a 0-0 draw with Spain saw them eliminated at the group stage.

The Atlas Lions finished third in Group D after drawing 2-2 with Honduras in their opening match and losing 1-0 to eventual group winners Japan.

It meant that Morocco once again fell at the first hurdle but Dutch coach Verbeek praised the efforts of his players - many of whom have been fasting for Ramadan.

"I'm very proud of them, especially regarding the situation around Ramadan and there are positives we can take from this," he told BBC Sport.

The Olympics are over, now it is time for these players to show themselves in the league

"It was not an easy camp because we started late and had to work very hard to get ready to play once every three days.

"I am satisfied with the way my players gave it everything in the tournament but I still think we had a chance of getting through to the next round. We had chances to win all three matches but in the end it is about scoring goals."

Utrecht-born Zakaria Labyad emerged as one of the new stars of the squad after scoring in the match against Honduras. He switched allegiances after representing Holland at Under 17 level and admitted he his next goal is to break into the senior side.

"It feels good to play for Morocco - my parents are very proud of me and this country is in my heart now," he said.

"The next aim is to get in the senior team and try to qualify for the World Cup. I think we can do it because this tournament showed we have a lot of good young players coming through."

Verbeek will now return to his role as National Youth Technical Director, with former Belgium international Eric Gerets having guided the senior side to two draws in their opening two matches of qualifying for the 2014 World Cup in Brazil.

And the 56-year-old, who coached Australia at the last World Cup in South Africa, believes many of his Olympic squad are ready to make the step up.

He said: "The Olympic project is over so it is now time for these players to show themselves in the league and try to get into the national team.

"Five of them have already been selected and a few more have come forward at the Olympics to show that can play at the highest level.

"They are still young so anything is possible - this is only the first step for them."