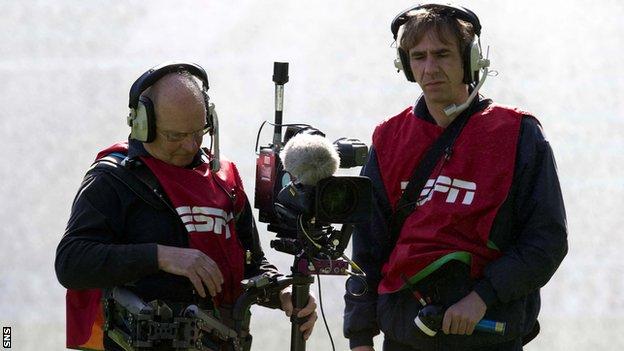 ESPN has followed Sky by announcing it has agreed a deal to show live Scottish Premier League games this season - and Rangers games in Division Three.

Under the deal, 30 SPL games will be shown on ESPN over the season, as well as 10 involving Rangers.

Three of the games of the club now playing in the bottom tier after liquidation will come from Ibrox.

It represents 10 more live Scottish football games on the station than in previous seasons.

SPL clubs had feared that the absence of Rangers from the SPL would result in a major loss of income after renegotiation of television contracts.

No figures have yet been released for the Sky deal or the one announced by ESPN.

ESPN announced: "The Clydesdale Bank Premier League, Irn Bru Scottish Football League and ESPN have reached a multi-year deal for rights to Scottish football from next season through 2017.

"The agreement means ESPN's channels in the UK and Ireland will next season screen 40 live and exclusive matches from both leagues - more than ever before and 10 more than in previous seasons on ESPN.

"Under the deal, 30 Clydesdale Bank Premier League games will be shown on ESPN over the season alongside 10 Rangers games from the Irn Bru Scottish Football League, including three home Rangers fixtures."