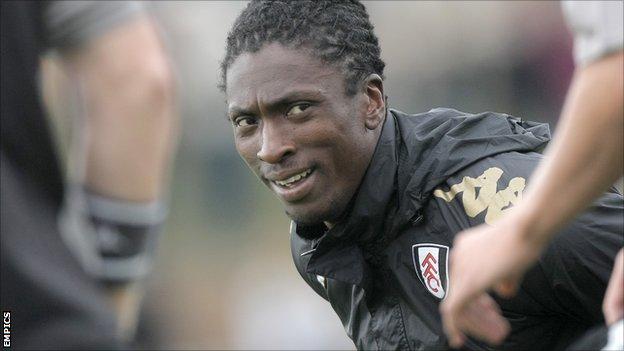 Blackburn Rovers have signed Fulham midfielder Dickson Etuhu for an undisclosed fee on a four-year deal.

The Nigeria international, 30, had been at Craven Cottage for four years, scoring six times in 127 appearances since joining from Sunderland in 2008.

Etuhu will team up with his former team-mate at Fulham, Danny Murphy, who joined Rovers earlier this summer.

"I've admired Dickson for a long time. He'll be a fantastic addition to the squad," said boss Steve Kean.

He told the club website: "He is a powerhouse in midfield, who has played at the highest level with Fulham and we feel confident he will complement our other midfield options."

The highlight of Etuhu's time at Fulham was a starting place in their Europa League final defeat by Atletico Madrid in May 2010.

He also started all three group games for Nigeria at the 2010 World Cup.