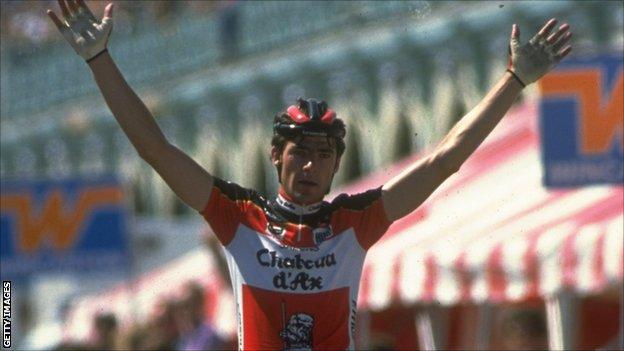 Carlisle United signing Alessio Bugno says he is glad he chose not to follow in the footsteps of his champion cyclist father Gianni Bugno.

Bugno Sr was twice world champion and Tour de France runner-up, while Alessio had enjoyed a career in Italian football prior to joining Carlisle.

"Until I was 12 years old I did both of them [cycling and football]," the defender, 22, told BBC Radio Cumbria.

"But after, I did what makes me happy, so it was football."

Right now, English football is the best country to play

Bugno signed a two-year contract at Brunton Park on Wednesday, after a successful trial period.

He left former club Monza at the end of last season after they were relegated from the third tier of Italian football.

However, despite interest from teams in Serie B to remain in his native country, the versatile defender says his ambition was to continue his career in England.

"I spent a good time there [Monza], with the other players I made a lot of good friends, but now I start a new page of my life," he added.

"English football is faster, the passing and movement is quicker. In Italy there are more tactics, but I like the [English] style of play.

Meanwhile, United boss Greg Abbott is likely to make a final decision on the future of trialists Dale Hopson and Ryan Donaldson after Friday's friendly at home to Middlesbrough.

You can hear the full interview with Alessio Bugno on BBC Cumbria's Sport Show on Friday, 3 August.