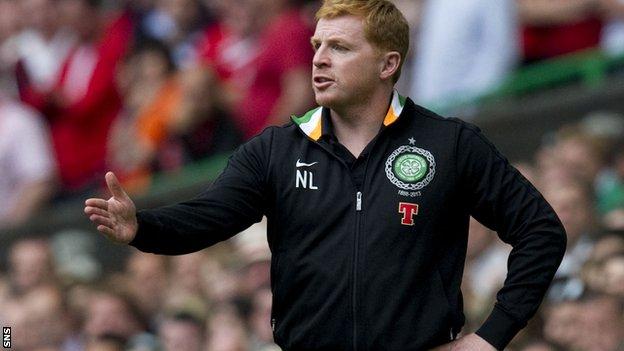 A late blunder by Dons keeper Jamie Langfield cost Aberdeen a point after Kris Commons fired in a low shot that slipped into the net.

"I'm delighted, because the opening game is always unpredictable to call", said Lennon.

"I'm always saying we're going to improve, and I know we will."

A well-organised Aberdeen limited Celtic to few chances in each half before Commons' trundling shot squirmed through Langfield's grasp on 79 minutes.

Lennon admitted his players were fatigued from Wednesday's Champions League qualifier against HJK Helsinki, but promised there would be more to come from the Scottish Premier League champions.

"We defended well and took control of the game, but going forward we were a bit flat. That'll improve as we go along.

"The players put a lot into Wednesday night, and it took its toll as the game went on.

"We worked the goalkeeper, but I never thought we created enough clear-cut chances for the amount of possession we had.

"The players were coming in at half-time saying they were stiff, but it was about getting through the game, getting the win and keeping a clean sheet.

"I felt that any time of win would be great, so I'm really pleased."

Lennon's counterpart, Craig Brown did not blame Lanfield for the error that cost his side a point and felt Aberdeen deserved at least a point from the match at Celtic Park.

"It wasn't just Jamie Langfield involved in the goal," said Brown. "It was a short corner we didn't react to properly, and I'm very angry about that.

"We should have been better organised, and we weren't. I need to see it again, but it looked as though a few of our guys switched off.

"It's all very well to blame the goalkeeper, but there was action before the short one and it should have been cleared before then.

"I feel very disappointed. Overall, I think a draw would have been a fairer result, but we're disappointed that we didn't the point we deserved."